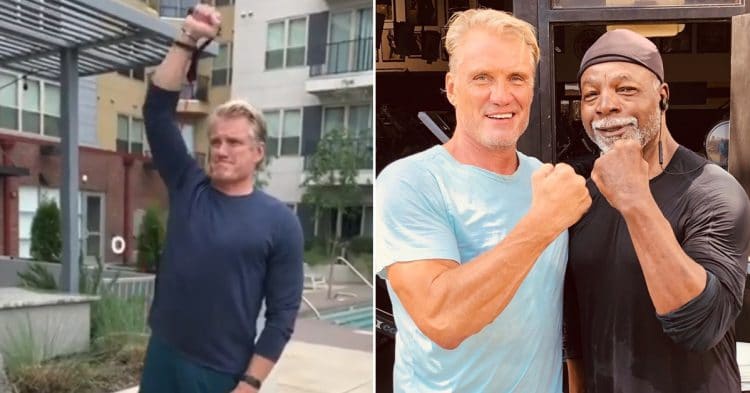 During these complicated times it can be difficult to stay in peak physical condition. However Hollywood star and fitness buff Dolph Lundgren has some tips to make things easier for those trapped at home.

Lundgren has been one of the biggest action stars in Hollywood for the better part of four decades. From the moment he donned boxing gloves to play the terrifying Ivan Drago in Rocky IV, fans have been drawn to his jacked physique. Even now, at 62 years of age, he is still chiseled and able to play roles in the Expendables, as well as TV’s Arrow.

Naturally, for Dolph Lundgren to maintain this level of physicality, he has to constantly stay in the gym. However this has been proving difficult in recent months, as the growing global health crisis has shut down many gyms. As such, he is forced to follow in the footsteps of some of Hollywood’s other stars, and find ways to workout at home instead.

This does not seem to be a problem, as Lundgren showed on Instagram recently. He managed to develop a solid workout circuit, broken down into three different parts. The good news is that in order to do them, all you need is a resistance tube and mini bands.

“Staying fit and maintaining my muscle mass during these hard times👊🏻 All you need for this workout is a resistance tube and a mini band.
Perform 3 rounds of each circuit before moving on to the next:

This is a pretty strong workout plan from Dolph Lundgren. As difficult as these times are proving to be, they have done a great job exposing some pretty solid ways to workout without the gym.

Life has a frustrating way of getting in the way of your workouts. It’s like the universe doesn’t want you...