An athlete of a different caliber, Fergus Crawley did a triathlon in less than 12 hours, before totaling 1200lb while powerlifting 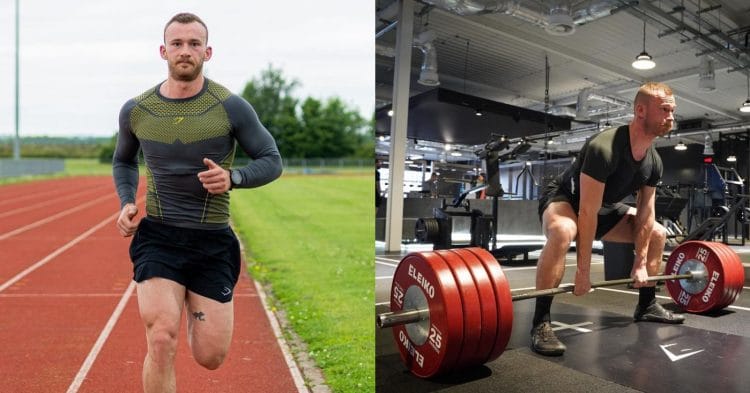 Fergus Crawley is an endurance athlete known for doing incredible stretches of physical activity in short amounts of time. He took things to the next level after completing his 1200Twelve Challenge.

It was exactly one year ago that Crawley did the 500Five Challenge, which saw him squat 501lb and run a mile in under five minutes, and do a marathon in the same day. As a powerlifter who turned his focus on balancing strength and endurance at the same time, he is referred to as a “hybrid” athlete.

Recently the Scotsman decided to take his 500Five Challenge and amp things up to a new level, with the 1200Twelve Challenge. Instead of just squatting and running a mile, this new challenge left him doing all three powerlifting lifts, and doing an Ironman triathlon in the same day.

These are the lifts that Fergus Crawley did for his 1200Tweleve Challenge:

Crawley got to work on these raw lifts at 3am, weighing in at just over 200lb for his mock meet. After completing the big three within an hour he was able to take a brief rest period before his Ironman Triathlon began.

The Outlaw Ironman Triathlon that Fergus completed consisted of the following exercises:

On average, those completing triathlons do so with a time of about twelve and a half hours, but Fergus Crawley needed to get it done within twelve to complete his challenge. However this was not going to be a problem for this hybrid athlete.

Fergus managed to complete the Ironman Triathlon with a total time of 11 hours, 53 minutes, and 38 seconds. This gave him just over six minutes to spare, and left him having completed the 1200Tweleve Challenge.

Following this impressive achievement, Crawley posted to his Instagram to celebrate his massive accomplishment. He also shared the videos of his three powerlifting lifts, showing off his over 1200lb total.

“1200lb powerlifting total, and a sub-12 Iron distance triathlon, in the same day.

Exactly 1 year since 500FIVE, where I managed to squat 500lb, and run a sub-5 minute mile in the same day – so what better way to honour the occasion?

One of the longest, most challenging days of my life. No doubt,” Crawley wrote.

It is hard enough as is, to do a triathlon in twelve hours or total 1200lb in powerlifting. However for Fergus Crawley to do both in the same day, and overachieve with both, is proof that he is a special kind of athlete.

The 12 Best Landmine Exercises for Building Muscle Mass and Strength