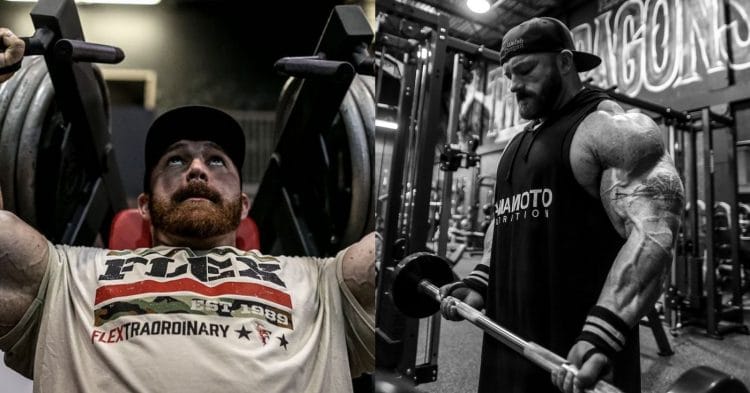 212 Bodybuilding legend Flex Lewis did not have the year he was hoping for in 2020. However he has kicked off his prep for the 2021 season, and looks to be picking things up right where he left off.

With seven consecutive wins at the Olympia under his belt, Lewis has long been regarded as the best bodybuilder in the division’s history. However he announced that he was going to be trying his luck in the Open Division, making the move in 2019.

It was expected that Flex would debut at the 2020 Mr. Olympia, and he was on track to do just that. Unfortunately a lingering injury would force him to withdraw from the contest just a few weeks from the show.

However this has not deterred Flex Lewis from getting back on track for a return in 2021. He has been at the gym kicking off his return to training, as he is preparing to kick off his prep for a competitive return.

The most recent post that Flex shared to Instagram showed how he looks as he buckles down for his training. The 37-year old was seen in the gym showing off his massive arms as he moves some weight around, tagging his coach Neil Hill as well.

Technically speaking the countdown that Lewis is referring to has not actually begun yet. In fact, he is not beginning his full on prep until February 1st, as he explained in another post a few days earlier.

He says that he had been listening and working with his doctors to rehab the injuries he had been dealing with. So now, come the beginning of the month, he is ready to get back to work with a passion.

“Since August I have followed the game plan, listen to my doctors, medical professionals, coach and wife 😜 and that count down turned into something like a kid waiting on Christmas Day!!!

As promised I will document this whole process showing the good, the bad, and what ever happens in between. Soon I will be dropping the first video showing my trip to Colombia and getting my stem cells.

I can’t thank all my fans, followers and friends for there support these last few months. I am excited for this next chapter! 💯”

That being said, it was clear from that previous photo that he is not starting from a severely depleted point. Flex Lewis still looked to be in tremendous shape, with his arms looking really vascular.

It is likely that this is due to the fact that, while he has been taking things easy, Flex is never out of the gym for too long. Just a few weeks earlier he was seen doing some EZ Bar curls, not pushing himself too hard, but still getting a pump.

All things consider, it is going to be great having Flex Lewis back on stage again. There is a lot of intrigue about he will do in Open bodybuilding, and hopefully nothing interferes with us seeing that happen this year.