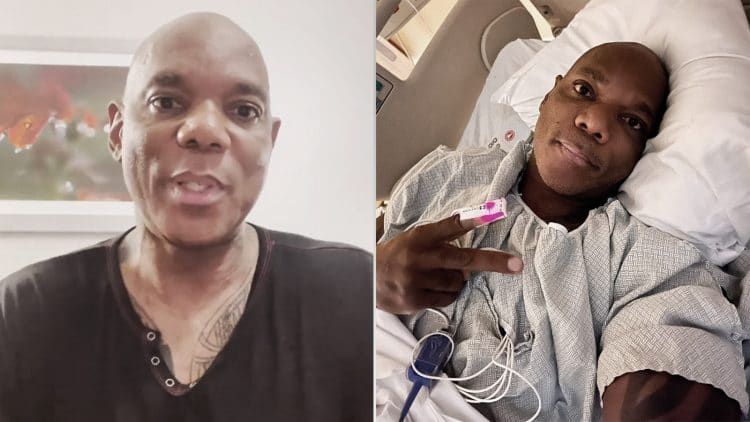 Bodybuilding legend Flex Wheeler has won the long battle against severe Covid-19 infection. The 56-year-old gave regular health updates through social media while battling with the infection in the hospital in Orlando, Florida. Wheeler was recently discharged from the hospital. He shared a detailed account of the entire episode in an emotional video recorded in his hotel room.

In the twelve-minute long video uploaded on his Instagram account, Flex Wheeler stated that he got Covid-19 infection while attending the 2021 Arnold Classic UK. However, he did not experience the symptoms until he returned home to Las Vegas and left for Orlando, Florida to attend Mr. Olympia 2021. Wheeler revealed that he started feeling sick after boarding the flight and immediately knew something was wrong with his body.

“My body started aching and cranking and I remember, like, reaching for my lat, my trap and my arm cramped. Goddamn, you know.” Flex Wheeler said.

Continuing further, Flex Wheeler added that his health deteriorated further over the next couple of days and he stayed in bed the whole time, trying to cope up with the body ache.

“I was screaming in my sleep because I had such severe body aches.” Flex Wheeler said.

Wheeler’s emotions got the better of him at this point as the bodybuilding legend could not elaborate further on his struggles. Meanwhile, worried about the increasingly unbearable body pain, Wheeler called up 911 who remained on standby for him.

Flex Wheeler was set to work with the production team at the 2021 Mr. Olympia event

Since his retirement, Flex Wheeler has attended every Mr. Olympia event barring the exception of 2017 when he returned to participate in the 2017 Mr. Olympia Classic Physique. However, 2021 was different as Wheeler was set to work with the production team at the event. Nevertheless, the rapidly worsening condition prompted the bodybuilding legend to make a decision and he called 911 to pick him up.

“Being on the other side of Olympia, on the production side, I was super excited.”

“I was like, you know, if you’re worried about, like, your pride or being embarrassed, you’re gonna f* around and die here in this hotel bed. So I just called 911.” Flex Wheeler stated.

Reluctant to draw attention to him, Flex Wheeler went to see the emergency officers on his own and refused their assistance. Emergency officers transported Wheeler to a local hospital in Orlando, Florida. The doctors diagnosed him with Covid-19 infection and he received treatment at the same hospital over the past several weeks.

Flex Wheeler suffers from hereditary kidney disease, focal segmental glomerulosclerosis. He underwent a kidney transplant in 2003, the year of his retirement, to cure the condition. The 56-year-old is still on the medication to keep the condition in check. However, the doctors told Wheeler they would eventually have to put him on a ventilator if the lung deterioration continued. Therefore, they had to put Wheeler off the kidney medication.

“They told me they had to put my kidney at risk because my immune system had not come online yet to fight and that my lungs were getting worse and worse every time they take an X-ray or a CAT scan.” Flex Wheeler stated.

The decision nullified the immediate risk of fatal lung failure as Wheeler made a fast recovery afterward. However, the 56-year-old might have suffered irreversible damage to his kidneys in the process.

“It probably shortened my life a lot.” Flex Wheeler said as tears welled up in his eyes.

Flex Wheeler has struggled with various health complications and surgeries over the last two decades. However, the precarious encounter with Covid-19 infection seems to have left a lasting impression on his soul. The relief and gratitude were palpable in his voice and demeanor throughout the video message. While concluding the video, the spirited warrior thanked the hospital staff and fans around the world for helping him sail through.

“I’m just thankful for all the doctors, all the nurses, all the overwhelming messages that I got from all the internet mediums, and the outpour of love and respect and appreciation. It didn’t fall on deaf ears. I can never show you how much I appreciate that.”

Fitness Volt wishes a speedy recovery and a long and healthy life to Flex Wheeler.