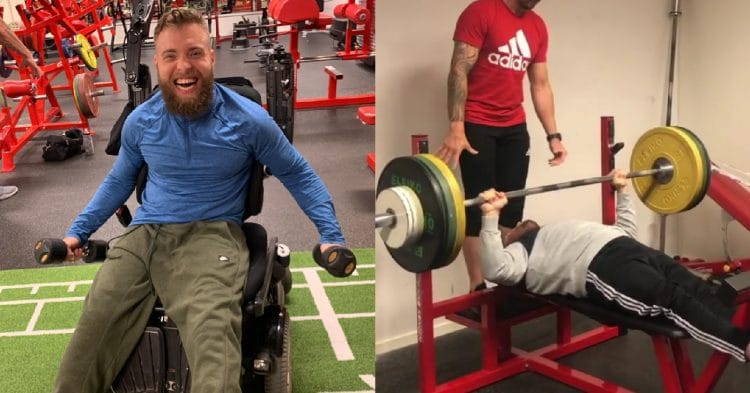 Frode Fyllingsnes is a personal trainer and powerlifter, who also happens to have cerebral palsy. He showed recently that even this is not enough to stop someone from trying to reach their fitness goals.

Being a fitness coach and powerlifter is not necessarily an uncommon thing. However in the case of Frode, his road to overcoming these challenges has been far more difficult than most. Although as someone who has succeeded in doing this, while dealing with the day-to-day difficulties of having cerebral palsy, he is certainly an inspiration to his clients and fans alike.

For nearly a decade, Frode Fyllingsnes has plateaued with his bench press, being stuck at 115kg. That being said, he has finally been able to surpass this number, after ten years of hard work. The Norwegian athlete took to his Instagram to share a post of him reaching a new milestone of 120kg on the bench.

“I have been working towards this for almost ten years and finally the goal has been reached of 120kg! With all the challenges in life that I have to day especially the last 4 years, training has always been a refuge for me. So this promise I made today proves that anything is possible no matter what situation you are in. The key is to learn to keep your head cool and take life with a smile no matter what. So this promise is for me and all of you in the Max family, thank you very much!”

This is a massively inspirational moment from Frode. As he said, he had been trying to reach this point for so long, therefore the excitement is clearly written all over his face. This growth in his upper body strength was evident way before this though, with him cranking out some pull-ups several weeks prior, making them look effortless.

With a constant smile on his face, Frode Fyllingsnes is a moving and uplifting example of how far you can go with enough determination. To see someone overcome cerebral palsy, and reach a goal after ten years of trying, is heartwarming beyond words.