A peaking block begins for Gabrielle Santarosa, who impressed all around her with a 419lb deadlift. 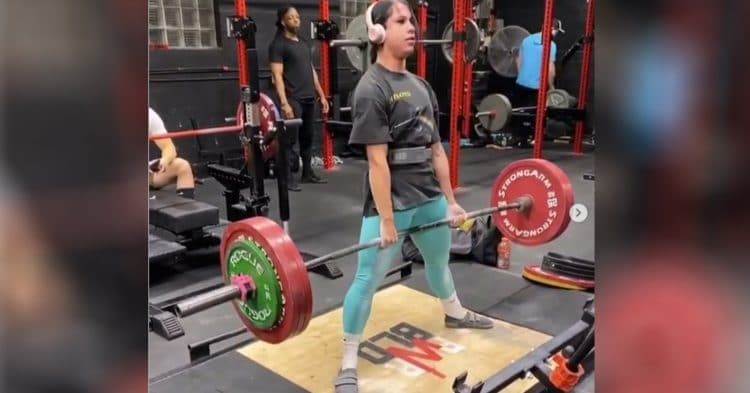 She’s the kind of girl that impresses bystanders in the gym, and Gabrielle Santarosa did it again. Today she came just shy of her personal best with a 419lb deadlift that rose the eyebrows of at least one person in her zone.

If it’s your first time seeing her deadlifts in action, you’d never guess that she has only just recently started taking it seriously over the last couple of years.

In August 2019, at the Northeast Powerlifting Championship, her deadlift record was 407.8lbs and her squat was 391.3lbs. Come September 2019, at Albany’s Strongest, her best squat came in at 424.3lbs with her best deadlift just slightly higher at 424.4lbs.

By the time her North American Championships arrived in November 2019, her best squat was 413.3lbs and she smashed a deadlift of 436.5lbs to record a new personal best.

Today, she posted on Instagram her most recent deadlift rang in at 419lbs. As you can see by the response around her, you aren’t the only one who will be impressed by that.

Just one year after she began competing for the public, and for her personal best records, Gabrielle Santarosa hits the peaking cycle of her current powerlifting training program.

The peaking block follows a strength block, and is designed to ensure a body can effectively use the strength attained through the strength block. One look at Gabrielle Santarosa is evidence enough that she’s well on her way to using her strength successfully in her next competition, and taking her game to the next level.

As she gears up for her next powerlifting showdown, she’s hitting very close to her personal best from now over one year ago.

Today, for Gabrielle Santarosa, peaking begins. Her success for this year’s round of competitions has only just begun, and it’s starting at home.