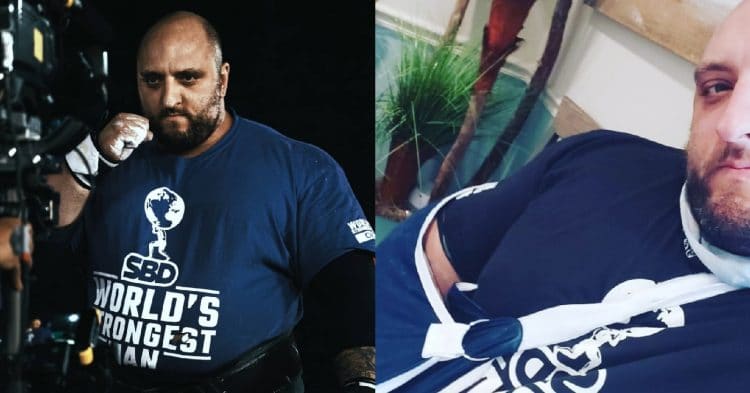 There have quite a few injuries in the 2020 World’s Strongest Man. Now Graham Hicks has been forced out of the finals with an injury of his own.

It has been a tumultuous week for strongman fans, as the 2020 World’s Strongest Man continues to get struck by problems. It all started with there being no strongman events throughout the year due to the global pandemic. Then when the WSM contest finally did come around, it was delayed by poor weather conditions, eventually forcing the contest to be moved to an indoors location.

Unfortunately it seems that this was only the beginning of the problems that the UK’s Graham Hicks has faced. Despite making it to the finals last night, an injury has forced him to withdraw from the contest. According to a post to his Instagram, he suffered a torn bicep, but he is promising that he will return next year, despite this disappointing setback.

I don’t even know how to put this into words or what to even say about how I’m feeling right now, all I know is this is not how I visioned my WSM 2020 ending, especially after fighting to be in that final, I thought this was my year. I am absolutely distraught but these things happen in this sport its all part of the game we choose to play.

A massive thank you to each and every one of you that have supported me along my journey its not the end its just the beginning of a new and stronger journey!!

This is obviously a massive disappointment for Graham Hicks. He joins the list of athletes who have been injured during this year’s World’s Strongest Man. Gabriel Peña was forced to withdraw after have heart concerns that sent him to the hospital. Not only that, but Ervin Toots had to pull out with an injured quad.

This is extremely unfortunate for Graham, as well as the other athletes who have gotten injured. Nevertheless the contest rolls on, as the 2020 World’s Strongest Man Finals are underway. The first part of the finals goes down Saturday, with the winner being determined after the last events on Sunday.

You can stay tuned to FitnessVolt for updates and coverage as the event unfolds this weekend.