Robert Oberst, Terry Hollands, Luke Stoltman, and others react to being unable to qualify for the finals of the 2020 World's Strongest Man 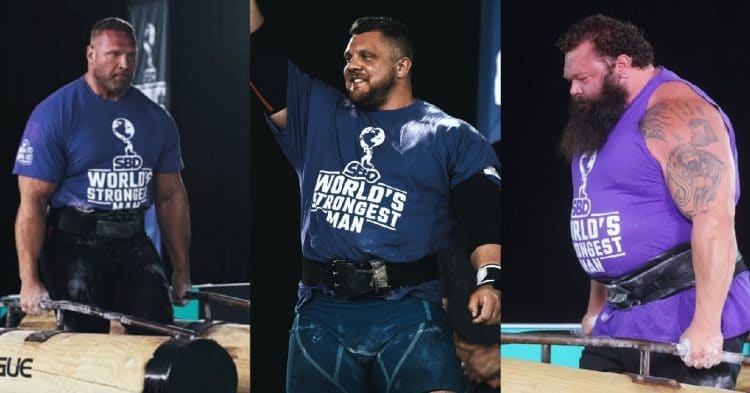 The finals of the 2020 World’s Strongest Man are underway, but not everyone who competed was able to qualify for the finals. Some of the athletes who failed to make it have reacted to their disappointing performances.

The qualifiers for the WSM are a grueling two day process that sees athletes compete in groups. The strongman with the highest score in their group moves on to the finals, while the second and third place athletes compete in one final event to determine which of them will join the other finalists. It is a tough process that not everyone makes it through, but in the end 10 athletes stood above the rest, preparing to determine who the strongest man on Earth is.

While those athletes compete in the finals, some of the strongman who did not qualify have reacted. Today we take a look at those reactions, as they each share this disappointment in their own unique ways.

Arguably the most popular athlete to not make it to the WSM finals, Oberst was going into this year with a ton of confidence. He would almost make it to the finals too, before losing to Luke Richardson in the Atlas Stone series tie-breaker. He took to Instagram to express his disappointment, but reassured his fans that he would be back better than ever next year.

“To say I’m disappointed would be a huge understatement. It just wasn’t in the cards this year. I worked so hard that it’s tough to take but that’s the life of an athlete. All that’s left to do is pick myself up and dust myself off before going back to work. Thank you all so much for the love and support, you’ll never know how much it means to me. There’s times when my body wants to quit but my mind will never allow it and a big part of that is you guys. You know I’ll be back and better cuz I’m riding this thing Til The Wheels Fall Off”

Things were especially disappointing for Terry Hollands at this year’s World’s Strongest Man. He had been leading his group on points for much of the qualifiers, before Brian Shaw snuck ahead by one point to secure his spot in the finals. So Hollands would face off against Aivars Smaukstelis in the Stone series, but would come up short. He did not let his disappointment show in the aftermath of this, instead looking ahead to the Shaw Classic.

Another fan favorite, and the elder Stoltman brother, Luke had a tough go of it at the 2020 World’s Strongest Man. He had one of the toughest groups to compete in, but still wound up in fourth place. However he is staying positive after the fact, still rooting for his brother Tom, who made it to the finals.

“All I can say is thank you to everyone for the support. It means so so so much.

We don’t always have the results we want. That’s life.

Let’s all support my amazing brother @tomstoltmanofficial and push him to getting on that podium.

Everything I can do I will do to help.

Time to go out and get that podium!”

It was a particularly rough go of it for Evan Singleton, who was expected to do the Atlas Stone series after scoring third in points. However he was added to the list of injured athletes, withdrawing before he could participate in the tie-breaker. He explained a bit of his injury on Instagram, saying that he tore his bicep and that there is a possibility he will need surgery.

“I’m sure most of you have heard by now but I had to withdraw from the World’s Strongest Man this year due to tearing my left bicep. I’m set to have an MRI today to see the complete damage and move on from there and at the moment I’m not ruling out surgery. We’ll see what the next couple of days being.

There really isn’t anything I can say without choking up a bit if I’m being honest. This meant everything to me and winning my heat and going to the final my first year was right in my hands. It was there. But that’s gone now. Gutted doesn’t begin to describe it. When I say that this meant everything to me, it meant EVERYTHING to me. There are a lot of different layers to this competition that I was fighting for the final that not alot of people know about from emotionally to financially to mentally I NEEDED this. But sadly it just wasn’t meant to be.

I want to thank everyone who reached out to me and sent their love. All the competitors who embraced me after it happened last night. You guys are rockstars and I love all of you. My coaches Adam and Kim, I wouldn’t have been here without you guys. My family and friends for being supportive and my girl Dee for comforting me last night when I was a wreck. All the staff who have been working with me and everyone who follows me. Thank you all from the bottom of my heart.

It doesn’t feel like it right now but this is just a minor setback. I refuse to let anything sideline me. When I said that one day I will be the World’s Strongest Man I meant that with everything I am. I will take my time to recover from this and I will go back to my gym and continue to pursue my dream. Nothing will hold me down. I am the T-Rex after all😉”

Eythor started off this year’s WSM strong, but faded towards the end of it. He would wind up in fourth place, with a score of 11 points. However he is not taking this too hard, promising that he will be stronger next year and use this as a learning experience.

“World’s strongest man is over for me this year!

I wanted more but over all I’m pleased with my performance. I keep gaining strength, just give me some time and I will be damn hard to beat!

I do want to thank my beautiful fiance @asrunospv for all the help and understanding. @stefansolvi for training me last few months. My training partners @ari_gunnarsson and @stefantorfason94. My parents for their support and all my friends 🙏”

Competing in the fourth group Bobby Thompson had a strong contest that wound up ending in disappointment. He made it to the tie-breaker after coming in second place with 14.5 points, but would come up short in the Stone series. To his Instagram he shared a quote from a friend of his, which he says really applied to how he was feeling after this disappointment.

“‘You have been weighed.

You have been measured.

You have been found wanting.

Left with a fresh taste of blood upon your tongue.

And an even hotter blaze burning within your chest.

With experience being the greatest teacher And time your greatest foe. As this tale (chronicle) unfolds I wait with a watchful eye.

Only time will tell how this journey ends However I’m going all in on my bet that when all is said and done,

You have what it takes to be the one. Blessed are those who are by your side.

Cursed are those who stand in your way. Go forth my brother and dont rest until your dreams come fond memories of a life fully lived’

Wise words i needed from a old friend back home.”

Stay tuned to FitnessVolt for coverage of the 2020 World’s Strongest Man Finals, as they unfold this weekend.