After a video of him arguing with people in the gym, Guy Cisternino defends his actions and explains his side of the story 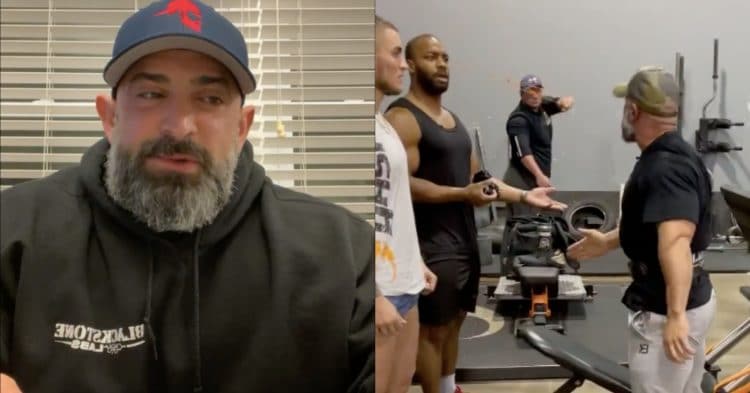 Video came out over the weekend, of Guy Cisternino having an altercation with a couple of guys at the gym. Now he reacts to this situation and defends his actions, doubling down on the fact that he was disrespected.

In terms of 212 bodybuilders, Cisternino is one of the most beloved and respected in his era. Guy has been on all of the biggest stages in the sport, with wins at the New York Pro and Toronto Pro, which earned him several appearances at the Olympia.

In recent times, he has been dealing with a handful of health issues that resulted in a hospital stay last May. However he is back to being healthy and training full time, moving heavy weight in the gym.

In fact, it was one of those recent heavy training sessions that got the attention of not just followers of Guy Cisternino, but the wider fitness world. Not because of the weight he was moving, but instead due to an altercation he was having.

A video that he shared to Instagram, sees Guy doing some heavy leg work while a couple of other gym goers were apparently too close to him, while laughing and joking. This made Guy frustrated, as he told them to joke around elsewhere, before getting up and getting in the two men’s faces.

This footage caused a lot of backlash for Cisternino, with many people saying that he was overreacting and being a jerk. So he was left feeling like he needed to explain himself, which he did with a subsequent Instagram Live session.

The brunt of the 80 minute session involves Guy inviting fans on to debate him about the situation. However before that, he took some time to give his side of the story, and he claims that things were not as simple as they seemed.

According to Guy Cisternino, he was at this gym at the behest of the owner, who sponsors him as an athlete. So he was there with that owner’s film crew, getting shots in for content, when these guys approached where he was doing leg work.

Apparently there is another angle of footage that has not been posted, that shows just how close these two guys were. So Guy felt disrespected by the two guys, who he felt were breaking gym etiquette protocols.

“During my set, they got off the leg press and got very close. Then they were laughing and joking and one of them slapped the other on the back and kind of lunged a little bit, and got extremely close to my machine.”

Cisternino goes on to explain that he was not trying to be disrespectful and told the guys to mess around somewhere else that was not in front of him. When the pair talked back and said that he was rude, this got Guy angry, and he got in their faces.

Guy admits that he may have overreacted, but he still stands by what he did. He went on to say that when he has shown other people who were at the gym that day the additional angle, it left someone who was upset with him apologizing and saying that he was in the right.

“I didn’t act appropriately either. I could have acted a lot more calm, I didn’t have to jump off the machine. But I did because I was heated, because I was in the middle of a set, and I felt disrespected,” Cisternino said.

“I shouldn’t have acted as nutty as I did, but I’m an intense mother—ker, and you put me in the gym where my intensity is through the roof, and that’s where it is and that’s how I act. I’m not going to apologize for asking them to move, but I will say that I could have done it in a different way.”

From there, Guy Cisternino began to invite people into the Live session to debate with them, and it is worth noting that one of the people involved the incident jumped on and the two largely worked things out. In fact, it ended with the two agreeing to train together the next time he was in town.

At the end of the day, this seems like one of those situations where both parties overreacted a bit. Nevertheless, it is good to see the beef squashed.