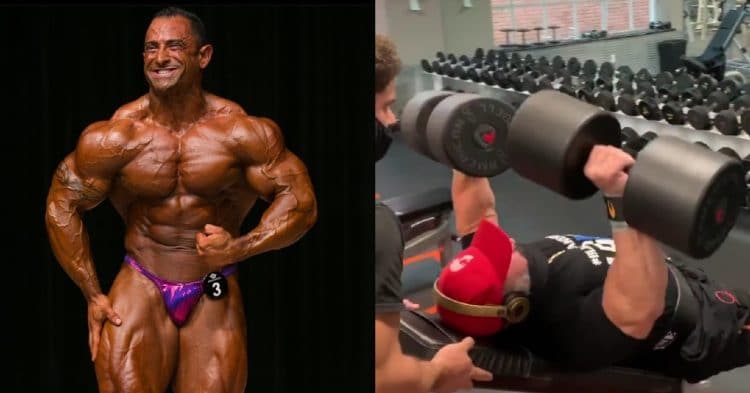 It has been a long road for Guy Cisternino, over the last few years. However he was recently able to return to form in a big way, surpassing his own expectations.

Competing for over a decade in the 212 division, Cisternino has been a mainstay in the sport for the majority of his career. Although he is far from having the most accolades you have ever seen, he was able to win multiple times at the New York Pro, and score as high as sixth at the Olympia. Even when he was not winning, Guy Jr. was always a force to be reckoned with on stage, and never made it easy for anyone to beat him.

The last few years have seen Guy Cisternino struggling a little bit, with a pretty serious shoulder and back injuries, and other health issues. Although he was able to compete, the 38-year old has been struggling to train with his shoulders for a few years, unable to do any really heavy lifting. However a recent post to his Instagram saw the New Jersey native doing some dumbbell presses, as well as other shoulder exercises, while saying this is easily the strongest his shoulders have been in years.

“Yesterday was a strange day to say the least. For those that didn’t know I had shoulder surgeon both shoulders 2 years ago this summer. On top of other things I herniated a third disc during quarantine that landed me in a surgery center twice within a months time for 2 epidurals. I hadn’t handled 150lb dumbbells in a very long time bc of shoulder issues, even post op strength never came back 100%. Until yesterday! I walked into the gym and started with DB flys and last set my buddy goes are you alright and I said no. I told him “I’m actually nervous bc the weights don’t feel heavy at all, and I haven’t felt like this in years.” So I put them to the test and was impressed (even threw them up) which usually I have to have them handed to me due to pain. What’s the point? It’s simple!

NEVER F—ING GIVE UP! NO MATTER WHAT!”

It is hard enough for a perfectly healthy man to do 150lb dumbbell presses, much less someone who has gone through what Guy Cisternino has been through. As he says, he usually has to have dumbbells handed to him when they are this size, which you can see in the video below. However this time he was able to throw them up himself, showing just how easy it felt for him.

It is good to see Guy Cisternino getting some of his strength back, and feeling so good. It has been a hard road for him lately, but things finally seem to be turning around.