Hafthor Bjornsson gives his view of the moments he found out Eddie Hall was out of their boxing match, gives potential date for rescheduling 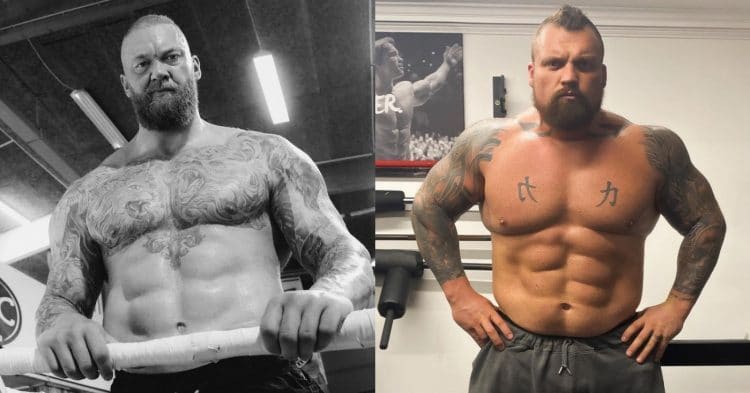 Fans were devastated at the news that Eddie Hall had ruptured his bicep and was out of the bout with Hafthor Bjornsson. Recently The Mountain showed what it was like for him to find out the news, and gave an idea of what may have caused it.

Hall was forced to pull out of the fight with Bjornsson, after a poorly thrown punch led to a massive bicep tear, resulting in surgery. It was a devastating injury that left Thor scrambling to find a potential opponent so he can still fight in September.

With a post to his YouTube channel, Hafthor shared a video of the moments he found out that Eddie was out of the fight. Here you can see the frustration on his face, as he speculated about what could have caused such an injury.

“Things like this happen, but it’s super annoying with it so close. Like, the fight’s coming up,” Bjornsson said. “This fight has to happen. His doctor has to tell him that he’s physically unable to fight for the rest of his life for it to not happen. He has to literally lose an arm or legs for it to not happen…

“In my opinion, lifting heavy weights and doing boxing does not fit. When you lift heavy, heavy, heavy, your arms get stiff. Then you punch the bag and it’s just too much for your body. He also had some back issues not so long ago, now the bicep, obviously something he is doing is wrong,” Bjornsson added.

“I wish that he would be a bit more careful with the heavy weights. Right now, in my opinion, it’s unnecessary. It just puts too much risk, it’s too risky.”

That being said, Hafthor Bjornsson is not giving up on this bout, or on continuing his training. He said that he is going to stay focused on the task at hand, and hope for the bout with Eddie Hall to be rescheduled for the beginning of the year.

“It’s benefitting me, if anything. He’s injured now, he won’t be able to train. It’s not my fault he got injured. Now I just have to stay focused, train, and hopefully early next year we’ll be able to fight. We’ll see how bad (it is) and how long he will be away.

“I’m putting a lot of things on hold for this. My wife asked me yesterday, ‘You should come to Canada, come have a vacation. He’s injured now, just take it easy.’ I can’t do that… I have to stay focused, I’m in this to win it,” Bjornsson said.

“I will keep on training, I will focus on getting better as an athlete, I will make my body get more used to this boxing lifestyle. I will become a machine. Literally a machine. I won’t stop, I won’t stop, there’s no way I’ll stop.”

It is a shame that the fight with Eddie Hall has been postponed, but it looks like Hafthor Bjornsson is taking things reasonably well, and keeping his focus straight. This was a nice insight into the gut wrenching moments of finding out your opponent has pulled out of a fight.