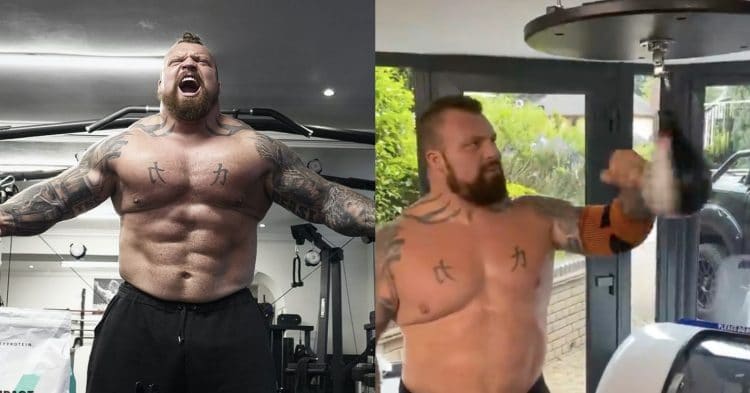 Fans were devastated to see that Eddie Hall had torn his bicep, resulting in a delay in his boxing match with Hafthor Bjornsson. However he is now back to training, and is having his first boxing session since that injury.

Both Hall and Bjornson have been training hard to prepare for their boxing match, which was scheduled for September. They had each been working to settle their beef for over a year, which is why it was devastating to hear that Eddie had injured himself while training, resulting in a torn bicep which needed surgery.

Despite the fact that it has only been around a week and a half since he got surgery to repair that terrible injury, the Beast is back in the gym getting to work on his boxing training again. Posting the Instagram, the Englishman shared a brief video that sees him hitting the speed bag, using both hands, with a weight on his left arm, which is the arm that had the ruptured bicep.

In addition to this speed bag work that can be seen in this video, Eddie says that he also did five rounds of sparring, using just his right arm. He did not show video of this, which is not surprising considering he has been keeping his sparring footage close to his vest, so as to not reveal anything to Thor about his style or techniques.

What is surprising however, is just how quickly Hall has been able to return to fairly high level training, given how badly damaged his bicep was. Hopefully he does not push himself too far, and reinjure his arm, or suffer another sort of injury by returning to action too quickly.

All things considered though, it seems like he is taking his rehab seriously, and not just jumping straight into boxing training. He followed up this speed bag video with another training clip from the following day, where he is seeing swimming in the pool, where he says he’s been doing some physical therapy type activities on his arm.

To be clear, is absolutely awesome and exciting to see Eddie Hall back in the gym so quickly, as it appears to suggest that his bout with Hafthor Bjornsson might not have to be delayed that much. On the other hand, as an athlete of his high caliber and longtime veteran status undoubtedly knows, it is important to take this process seriously so that he can avoid making things worse.