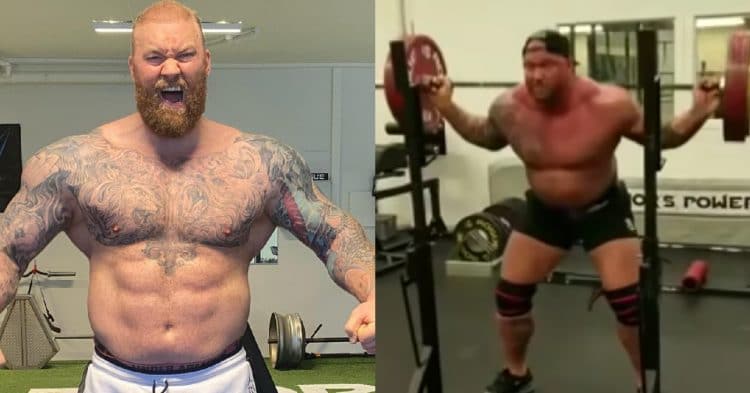 By all accounts, Hafthor Bjornsson has been melting the weight off as he prepares for his boxing match with Eddie Hall. He reminded us recently though, that at his best he already had good cardio, with a throwback video.

Since he announced his retirement from strongman, Bjornsson has been putting all of his focus into preparing for his upcoming boxing match. Not only has he brought in some of the best athletes in combat sports to help train his technique, but he has also been getting into way better conditioning. As he transitions from strength training to cardio, he has been dropping weight like crazy, looking leaner than he has ever been.

It seems like every time Bjornsson has been seen he is much more slender than he was the time before. There are some serious differences in between diets for strongman and boxing, simply due to the nature of each sport. So naturally as his training and nutrition has changed, the difference in his physique are as clear as possibly imaginable.

However it is about more than just dropping the weight. Bjornsson has also been increasing his cardio at the same time. He chose to remind fans of how good his cardio can be with a throwback video posted to his YouTube channel. This was not as extravagant as his usual YouTube videos, but the seemingly old footage showed him doing a whopping 29 reps of a 440lb squat, demonstrating his insane stamina.

The cardio displayed by Hafthor Bjornsson here is simply off the carts. There are people out there who squat 440lb for a one-rep max, but he nearly hit 30 reps with ease. He made it pretty obvious that he is feeling significantly fresher than he would have had he been preparing for next week’s World’s Strongest Man.

It has been a while since Bjornsson checked in with his weight, but the results are written all over his physique. When he was training with former UFC heavyweight champion Bas Rutten recently you could see that while he is trimming down, he still has plenty of power. Even when comparing his physique with Rutten’s, Thor looked to be in tenebrous shape.

There is still just under a year until the boxing match between Hafthor Bjornsson and Eddie Hall, but Thor is clearly taking his training very seriously for the fight. With so long to go, it will be interesting to monitor how his physique continues to change and his weight keeps going down. So far though, he looks better than he ever has.

San Francisco CrossFit to Close Its Doors After Fifteen Years