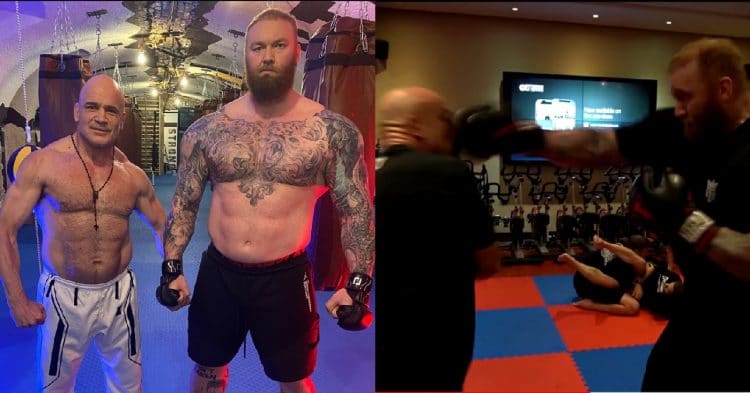 The man known as the Mountain, Hafthor Bjornsson is working hard to prepare for his boxing match with rival Eddie Hall. To get the most out of his training, he has brought in MMA pioneer Bas Rutten to help him train.

The anticipation is high, seeing these two strongman athletes settle their beef inside the boxing ring. Each man has been working hard for the fight, switching their focus from feats of strength to leaning out and increasing their cardio. Of course, they have both been learning technique as well, looking sharper with each passing update.

However Hafthor Bjornsson decided to take it up a notch recently, when he uploaded a boxing update to YouTube, working alongside Bas Rutten. Rutten is a former UFC heavyweight champ and MMA legend, who has gained fans for his eccentric sense of humor while teaching self defense techniques. He has fought all over the world and decided to lend his knowledge to Hafthor, and help him prepare to box Eddie.

Training with the one and only @basruttenmma New YouTube video up from our session together. Go check it out. Link is in my bio!

“I’ve been a big fan yours for a long time. It’s absolutely a pleasure to work with you,” Bjornsson told Rutten. “I’m pretty confident that I’m going to learn something great that’s going to benefit me for the fight next year.”

“Your opponent better watch out,” Rutten joked back. “I’m going to teach you a few tricks. I know exactly how to deal with problems so it’s going to be fun.”

From there, Rutten teaches Bjornsson about the unique sound effects that he has been known for, using this to increase speed and power in punches. He also gives some tips to Thor on how to increase his speed so that he can combine that with his natural power and make himself more explosive. He tells Bjornsson that he has to get his muscles used to fast twitch motions, rather than the slow and steady movements of lifting weights, that he is used to.

After this the pair begin to work on drills for countering straight punches. Bas Rutten teaches Hafthor Bjornsson that he can parry a straight and come back with an explosive punch or combination. Then they start drilling it, and Bas genuinely looks terrified with how long Thor’s reach is and how close his face comes to the Mountain’s fists.

Of course, what would a training session with Bas Rutten be, if they did not touch on his favorite attack: the liver shot. They then take some time for Thor to hit mitts, as they drill combos and Bas works to refine some of the technique behind Thor’s punches. Bas even takes a couple shots to the body which even makes him comment about how hard he hits.

To be fair, one training session with Bas Rutten is not going to make the most amount of difference for Hafthor Bjornsson. However there is still plenty of great training advice that Thor can take back with him and expand upon. It will be interesting to see how much this advice carries over into the ring, next September.