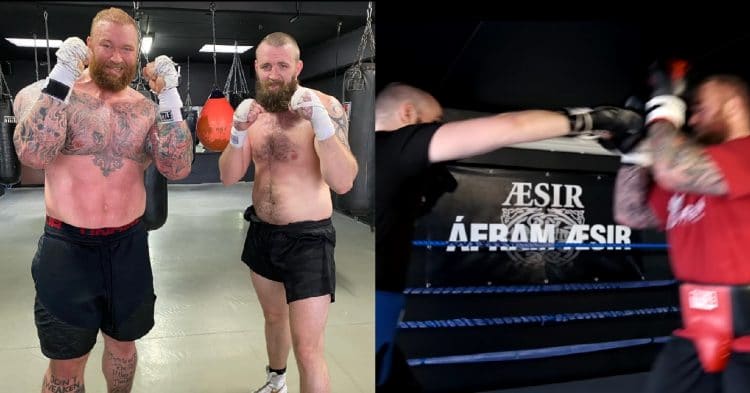 The last few weeks have seen an apparent uptake in the training that Hafthor Bjornsson is doing for his fight with Eddie Hall. As he gears up for the contest, he has called upon an undefeated professional boxer, to help him prepare for the fight.

The fight between Bjornsson and Hall is still almost a whole year away, but both men have been training like madmen to prepare. Neither one has any real combat sports experience, outside of the occasional dabbling into that field. Therefore they have both devoted themselves to learning the craft, hoping to bring some decent technique to the ring by the time they compete next fall. This has largely paid off too, as they each seem to be making improvements in their own rights, even though there is still a long way to go.

After the birth of his son, Hafthor Bjornsson seems to be really diving into his boxing training. In fact, as he showed with a recent video to his YouTube channel, he even decided to bring in a professional boxer to help him spar. Heading into the Aesir Boxing Gym, he works with 11-0 undefeated heavyweight boxer Kolbeinn Kristinsson. Warning up with some shadowboxing and technique drills, the pair then move into legitimate sparring, which was apparently Thor’s second session for the day.

“I did some sparring sessions this morning,” Bjornsson said. “I’m grinding guys. I’m training four times a week in the morning, and six times a week around two. So I’m training a decent amount and I can feel my endurance increasing, which is good. This morning I did four rounds, three minutes and what was great there is that my opponent was more tired than I, which is good because I’m usually the one who is tired.”

For the most part the sparring is relatively light, with Hafthor Bjornsson working mostly on his combos and head movement. Then, at the end of the sparring session they seem to really let the hands go, trading shots in the pocket. There is quite the difference in height between these two, but Thor does a decent job of finding the target with his punches, landing some hard shots to work his way out of the corner.

All in all, it really seems that the progression of Hafthor Bjornsson and his boxing technique is coming along nicely. He is certainly not a pro, and has plenty of areas to improve upon, but given his size and the fact that this is new to him, he seems to be picking things up relatively easily.

How to Bring Up a Lagging Muscle Group