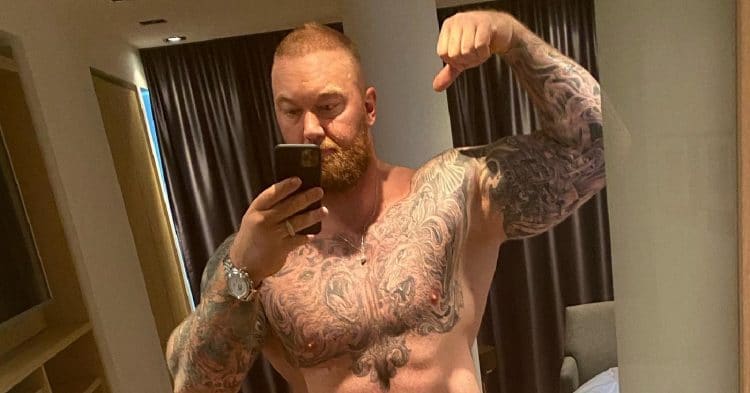 While he has been preparing for his boxing match with Eddie Hall, Hafthor Bjornsson has been losing a ton of weight. He recently shared a physique update that showed how shredded he is starting to look already.

We already knew that Bjornsson was a physical specimen, and essentially a modern day Viking. Standing 6’9, the Icelandic strongman champion and actor is known for his imposing figure, competing at a bodyweight that was regularly in the mid-400lb range. However once he retired from strongman, and decided to put all his focus into preparing for a boxing match with his rival, Eddie Hall, he has started to drop a ton of weight. He is hoping to get his cardio as good as it can be, meaning his weight needs to be as low as possible.

Although the boxing match is still over a year away, Hafthor Bjornsson has already dropped a crazy amount of weight. He recently took to his Instagram to share an update on how he looks after losing this weight. This update was after he weighed in at 170kg (375lb), and he says that he has lost a whopping 36kg (80lb) since beginning this training.

This is an insane amount of weight loss for Bjornsson, after only about five months. Not to mention the fact that it is incredibly wild to think that someone who is weighs 375lb can look this jacked. The fact that he has such a defined six pack at this weight is awe inspiring, even with his giant stature.

Thor actually provided a closer look at his physique a few days earlier. Here he can be seen standing on the scale to show everyone that he weighs an even 172kg. Yet he also gives a close up look at how he is looking at this weight, and even though he is not flexing his abs, you can still see them all very clearly.

It would seem from the training footage that Hafthor Bjornsson has shared, that he is looking to have a cardio advantage over Eddie Hall, who is also looking for the same thing. He has also been working to hone his technique, in order to utilize the reach advantage that he will have over the Englishman. There is still a ton of time for him to prepare, so it will be interesting to see how much he weighs by the time the fight comes along.

Over 40? This is How You Really Should Be Training