Hafthor Bjornsson Does Solid Cardio Work Ahead Of Boxing Match 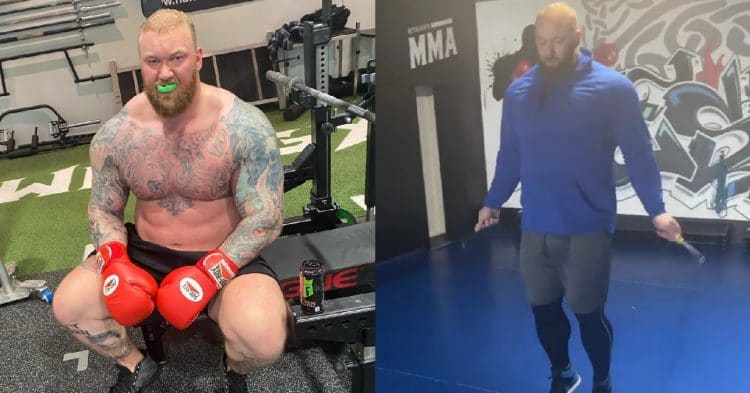 With his boxing match with Eddie Hall just over a year away, Hafthor Bjornsson has still got plenty of time to prepare. Regardless he is still training hard, and working on his cardio, for this venture into new territory.

Normally when fights are announced, it happens a few months before the contest takes place. However in the case of Bjornsson vs Hall, the fight was revealed over a year in advance, shortly after Thor took Eddie’s world record for the heaviest deadlift ever. This is a result of the fact that both men will need plenty of time to train and prepare for something, that is very different than the strongman training they typically do.

One of the big factors that many fans are worried about, is the cardio of these two enormous men. We have already seen some of the cardio work that Eddie Hall has been doing lately, and both men have lost tremendous amounts of weight over the last several weeks. However Hafthor Bjornsson decided to give a glimpse into his own cardio session, with a recent post to his Instagram. Here the Mountain can be seen jumping rope, and getting his rate rate high to build his endurance.

“Meet me in the playground if you want to have a showdown. 🦍”

Obviously there is a lot more that goes into cardio work than just jumping rope. However you can see that Hafthor is training at Reykjavik MMA, in his home country of Iceland. Therefore it would appear he is working with some people who can help build his technique. Doing this type of training will almost certainly help to add to his gas tank, just as much as it will amplify his skills.

At the end of the day, there is still a while to go before we see Hafthor Bjornsson step inside the ring against Eddie Hall. However we will be monitoring both men closely until then, to see who looks to be taking their training seriously.