Hafthor to Eddie: "I'm Ready To Knock You Out in The Ring" 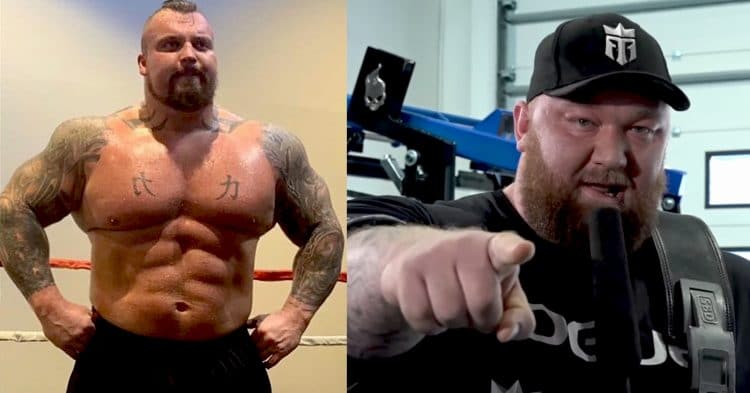 Hafthor Bjornsson made history today with a 501kg/1105lb deadlift, surpassing the previous record of 500kg/1102lbs held by Eddie Hall. After the 2020 Arnold Strongman Classic champion locked out the big lift as part of the World’s Ultimate Strongman, he had a few words to say.

“I’m absolutely speechless, I’m just happy and thankful that I got the opportunity to do this even though the word is going through the shit it’s going through,” he explained.

“Everything today went according to the plans. Like I said, I’m over the moon.”

“It feels great and not only did I pull this incredible weight but I just felt great afterwards. I’m standing here tall, feeling good, no injuries, so I’m healthy as well. I believe today I could have done more but what’s the point, I’m happy with this. My family and friends, they were happy with this and I decided to call it.”

Bjornsson then responded to the fact that his lift was watched by millions around the world in 180 countries.

“It’s crazy, hearing these numbers afterward as well makes me feel extremely proud.” “I’m just so proud to see where the sport is going. People are getting more and more interested in the sport.”

When the 30-year-old Multiple-time Strongman champion was asked what’s next for him, he answered…

“Well, something new and big. Core Sports just offered me a 7-figure contract which is the biggest contract of my life. I have signed already.”

But then things got a little personal… “Eddie Hall has been running his mouth now for some weeks and I know that he got the same deal, the same contract”, said Bjornsson.

Eddie, I just knocked out your record and now I’m ready to knock you out in the ring. Time to put your fist where your big mouth is and sign the Coresports contract. I’m ready, are you ready Eddie.“

Bjornsson and Hall got into a serious back and forth leading up to the former’s world-record performance today. The former said he wouldn’t count Bjornsson’s record if he broke it since it wouldn’t be done in actual competition due to the current global situation.

Thor responded by saying he was robbed at the 2017 World’s Strongest Man competition which Eddie won. This sparked some real beef between the two. Then Hall was asked in an interview if he thought Bjornsson would complete the lift and although he thought it was possible, he was more in favor of an unsuccessful lift.

And then in an exclusive interview with Fitness Volt, Hafthor Bjornsson explained that he thinks Eddie Hall doesn’t want him to take his legacy away. But in all honesty, Eddie Hall has achieved a lot with a 2017 World’s Strongest Man title and all-time world record performance back in 2016.

Watch the interview and boxing match challenge below:

Although, Hall definitely wasn’t the only one who thought the record shouldn’t count, as fellow Strongman competitor Robert Oberst and all-time great Zydrunas Savickas chimed in to express their take on the situation. Oberst even made a parody video, mocking the attempt by “breaking the log lift world” at home referring to his dog as the referee.

But then 4x World’s Strongest Man champion and rival Brian Shaw weighed in as well, of which he was against Bjorsson attempting the world record in his own gym. He explained that there’s a big difference between doing it in front of a live crowd and in his own backyard. He pretty much explained how ridiculous the thought of it is and even used the NBA as an example for comparison to determine a winner in the same way.

But despite all of the opinion from others, Hafthor Bjornsson went ahead and attempted the lift anyway, of which he came out successful. And there’s no doubt he’ll attempt in the next big competition with other competitors and maybe he’ll even try for more to really prove a point as he said recently he thinks he can do 520kg/1146lbs.

But for now, he’s probably focused on that potential boxing match with Eddie Hall, which was already in discussion before the record deadlift.