The Strongman icon tests positive for coronavirus about a week after his exhibition boxing match against Steven Ward. 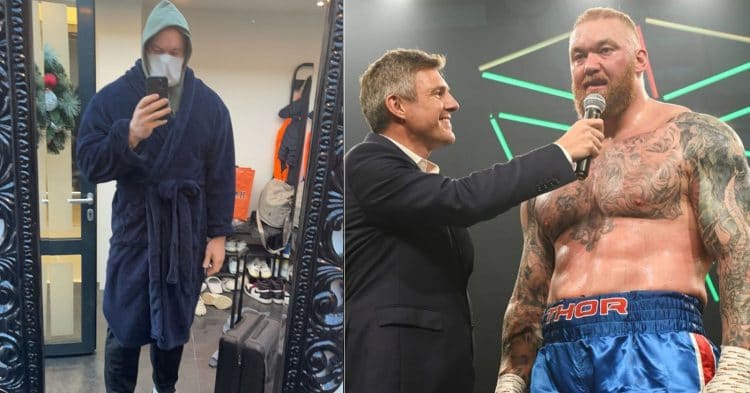 Strongman icon and 2018 World’s Strongest Man winner Hafthor Bjornsson apparently tested positive for Covid-19 on Saturday. He shared the news on his Instagram today, which is also less than two weeks after his exhibition boxing match against Pro boxer Steven Ward.

Here’s what he wrote…

“Little update for you guys. So Saturday I started to feel ill and decided to get tested again even though I just got tested on the 19th (Tuesday) and that test came back negative. The test I did on Saturday the 23th came back positive and I’ve been laying in bed since. The next two weeks will be isolation for me. This is no joke. Stay safe people! I don’t wish this on anyone. Hopefully the world will be in a better place soon ❤️“

The deadlift world record holder said he wasn’t feeling good on Saturday and decided to get tested after receiving a negative result on the 19th. But he’ll now spend a few weeks in quarantine and is taking this thing seriously.

Bjornsson is preparing for a boxing match against fellow Strongman Eddie Hall, which is scheduled to take place on September 18th this year. He’s been training as if his life depends on it while dropping over 100 pounds in the process, and he got to test his skills in Dubai recently.

In the meantime though, he’ll be fighting against this illness and hopefully, he can defeat it so that he can get back to his training as soon as possible.

Hall may have the advantage right now in that he’ll get to keep training and improving but it’s much too soon to tell.

The coronavirus has put a damper on a lot of things with many athletes and big names testing positive and events looking much different from what we’re normally used to regarding crowds and procedures.

But the most important thing is safety for all involved and we wish the retired Strongman legend a speedy recovery.