Hafthor Bjornsson has moved his boxing exhibition match to Dubai, and one week out he shows off his trim and jacked physique 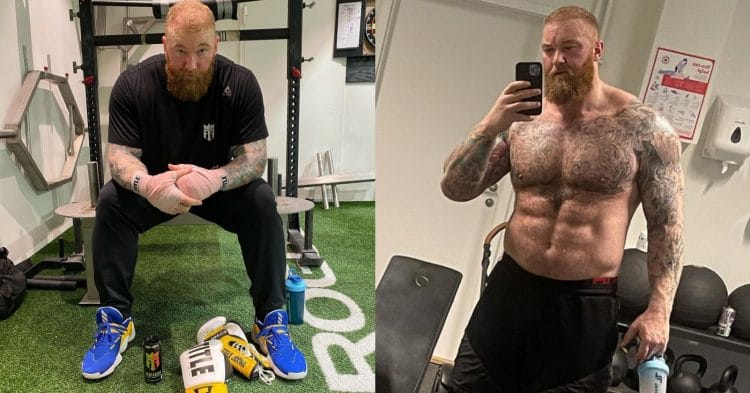 It was expected that Hafthor Bjornsson would be making his debut in the ring on January 16th in Iceland. Now both the date and location have been changed, due to increased restrictions.

Although many people are waiting to see Thor step in the ring with Eddie Hall, he is actually making his boxing debut before that. He revealed recently that he would be taking on Steven Ward in an exhibition match.

The contest was originally expected to go down on January 16th, in Iceland. However Bjornsson recently revealed on Instagram that the contest was being moved to Dhabi, on the 15th, due to increased restrictions.

“Things are getting real! Due to some covid restrictions here in Iceland we have decided to move this fight to the Conrad Dubai!

Getting very excited to step into the ring 🥊🤩

You can tune in to watch the fight on Jan 16th, on my YouTube channel or Twitch!”

Hafthor Bjornsson says things are getting real, and they certainly are. He has been training hard to make the move to boxing, and it will be interesting to see the work pay off.

Along the way, Thor has been dropping insane amounts of weight, as a result of his heavy cardio training. He has even revealed that his total weight lost since scoring the world record deadlift last May, is a whopping 110kg.

This drop in weight is evident in his physique too, as Bjornsson showed with another recent physique update from a family training day. Here you can see the giant Icelandic strongman posing with his shredded six pack on full display.

With just a week to go until the boxing match, it is crazy to see how far Bjornsson has come over the last several months. He has been putting the time in, and looks to be in the best shape of his entire life, even though this is just an exhibition.

The physical transformation that Hafthor has gone through has been one of the most legendary things you will ever see. That makes it all the more intriguing to see what he looks like in the ring, in terms of his actual boxing skills.

With the bulk of the training having been completed for this fight, it seems that Hafthor Bjornsson is primed to put on an epic performance. You will have to tune in on January 15th, to see how he does in his first fight.