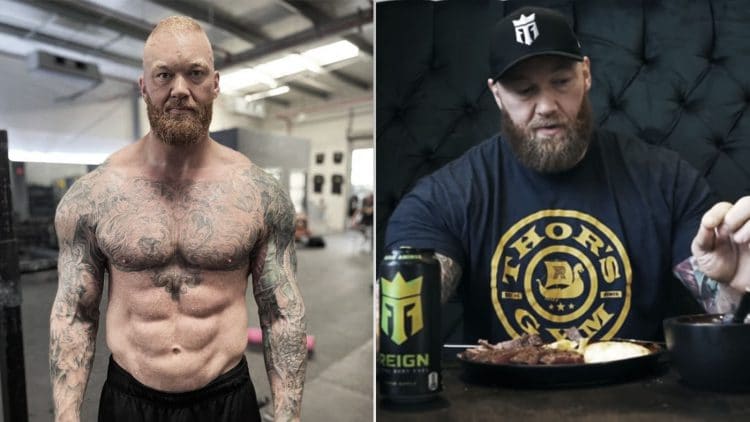 Strongman Hafthor Bjornsson’s transition to professional boxing has come with an impressive body transformation. The Mountain has cut down to nearly 340lbs from 400lbs that he weighed during his days as a strongman. Bjornsson’s impressive KO win over Devon Larratt in September suggests that he is approaching training and diet the way it needs to be for a boxer.

Apart from changing the training routine, Bjornsson has significantly lowered his caloric intake from 8000 to 1000 calories per day. In a recent video uploaded on Hafthor Bjornsson’s YouTube channel, the strongman-turned-professional boxer shared a full day of eating.

Courtesy to Hafthor Bjornsson’s YouTube channel, you can watch the video here:

Also Read: WATCH: The Hafthor Bjornsson’s Full Day Of Eating Like A Strongman

Hafthor Bjornsson started the video by stating that he consumes a lot of vitamins so that the liver and heart functioning can be maintained at an optimum level and plans the vitamin supplement intake for the week in advance.

Bjornsson starts his day with a hefty breakfast consisting of steak, oats, and berries. However, the amount of red meat consumed per day has reduced by more than half since Bjornsson’s transition to boxing. The 33-year-old stated that he now eats red meat only twice per day as opposed to five to six portions during his days as a strongman.

While savoring the first meal of the day after careful cooking, Hafthor Bjornsson revealed that he consumed rib eye in large quantities before. However, in order to maintain the necessary body composition for boxing, he now opts for leaner cuts of red meat like flank steak and tenderloin as they are far less calorie-dense.

After a candid talk about his life after becoming a father, Hafthor Bjornsson went on to share the second meal of the day that consists of rice, leafy greens, and red meat.

Hafthor Bjornsson’s body transformation is testimony to the fact that he approaches his diet and training with a precise understanding of the body’s requirements. While stating the importance of a balanced diet, Thor advised that people should get the blood work done to determine the diet that works best for an individual’s specific requirements.

“I know very few people do that and it’s always pain in the a*. But if you want to get the most out of your diet, that’s the way to do it.”

Hafthor Bjornsson heads to the gym for training after eating the second meal and carries the third meal to the gym with him to avoid resorting to fast food or skipping the third and fourth meal altogether.

At 6ft-9in tall and 340lbs, Hafthor Bjornson’s body is not really perfectly built for running. Thor revealed that an activity like running puts a lot of stress on his knees and therefore the possibility of injuring himself during training heavily outweighs the benefits. However, assault bikes, swimming, and raw machines are his go-to equipment as they do put significantly less amount of stress on the knees.

“I’m too big for running. I’m just too heavy. My knees just don’t handle it. That’s why I don’t run.” Hafthor Bjornsson said.

While training in the gym before his third meal, Hafthor Bjornsson revealed that he finds it fairly difficult to draw enough oxygen while breathing through his nostrils and asked the viewers to share tips to solve the problem. So those who want to help the Mountain with this can sound off their tips in the comments section of his video!

Bjornsson’s third meal of the day is the most carb-heavy meal of the day and consists of Cod and potatoes. The 4-time World’s Strongest Man is not fond of potatoes and adds chicken stock in it to make them palatable and ranks it at five on a scale of one to ten, one being the least favorite.

Hafthor Bjornsson eats the fourth meal of the day right before a hot and cold tub bath and sauna. The meal consists of salmon, rice, and zucchini.

Thor’s diet is devoid of chicken. At least two of his daily meals during his strongman days consisted of chicken breast. However, the 33-year-old says that he prefers to stay away from the chicken because of its dry and flavorless nature.

Hafthor Bjornsson follows this diet six days a week and enjoys a whole day of cheating once in a while. What do you think of Thor’s diet? Will you try it for a week and see how your body responds to it?