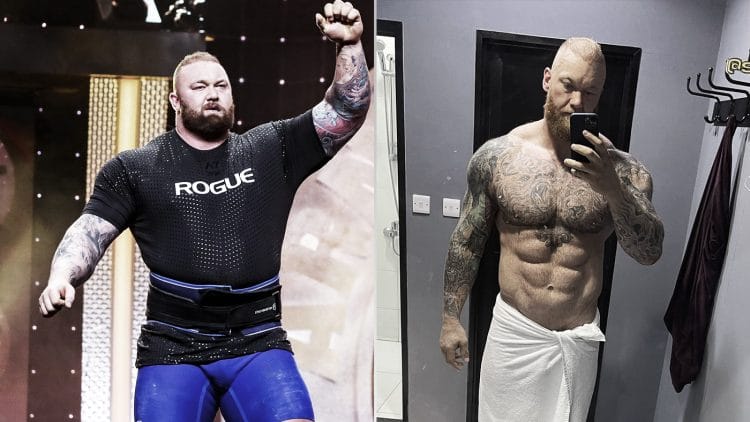 Professional strongman Hafthor Bjornsson has a boxing showdown against arm wrestling ace Devon Larett a mere 10 days away. Relatively inexperienced in boxing, ‘The Mountain’ is not leaving any stones unturned to show up in the best shape for the bout. Courtesy of strict training and diet regimen, Bjornsson has lost over 50kg in preparation for the third fight of his boxing career. He recently took to Instagram to show off his body transformation for the fight.

“Haven’t been this light and skinny in years. Feels good!” The caption to Hafthor Bjornsson’s Instagram post read.

For the uninitiated, Hafthor Bjornsson is the first person to win Arnold Strongman Classic, Europe’s Strongest Man and World’s Strongest Man in the same calendar year. At his peak, Bjornsson weighed 205kg (~450lbs) and came to be known as ‘The Mountain’ for his portrayal of Gregor Clegane in Game of Thrones.

During an interview with Virgin Radio Dubai, Bjornsson revealed that his diet was far more restricted for this transformation. While explaining what a typical day of eating looked like, Hafthor Bjornsson told:

“Breakfast is two eggs, some oatmeal and blueberries. That’s about it. I have 200gm of chicken as well. Then at lunch, I have 230gm of beef tenderloin with some 140gm of rice and some vegetables. The third meal is chicken again, 230gm roughly with 200gm of potatoes and 100gm of vegetables. The fourth meal is salmon, 230gm with 100gm of rice. ”

Hafthor Bjornsson was originally scheduled to fight his archrival Eddie Hall. The bout was labeled as the ‘the heaviest match in boxing history’. However, Hall suffered a bicep tear during training that postponed the potential showdown to early 2022.

While giving his take on the situation on his YouTube channel, Bjornsson stated that he was ‘in it to win it’. With no intentions of slowing down his preparation for the eventual showdown, he continued with the training routine. Arm Wrestling ace Devon Larett stepped in to fight ‘The Mountain’ for the September 18th event. Rising cases of Covid-19 infection resulted in the fight getting moved to Dubai from its original venue in Florida.

Two men epitomizing brute strength and power assure a fun fight and spectacular performances on the fight night. How do you see the fight between Hafthor Bjornsson and Devon Larett unfolding? Sound off in the comments!