Larry Wheels hits the gym with Regan Grimes, and scores a new personal record in the process 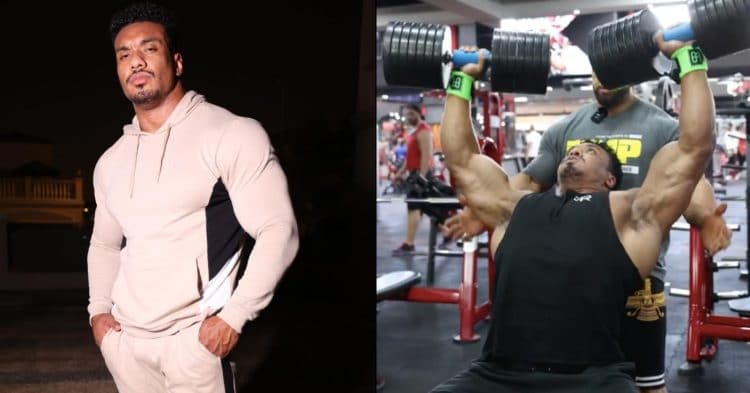 It has been a few months since the personal record wrecking machine himself, Larry Wheels was seen crushing some serious weight. He must have realized this, because he recently hopped in the gym to score a new rep PR on the shoulder press.

Wheels made his name for his ability to seemingly never cease pushing past the limits of what people think is possible for him. He has tried to dip his toes into the waters of other sports, to mixed success, but every time he tries something new, his insane athleticism is always put on display.

Related: Larry Wheels Injured During Huge Squat: ‘I Ripped My Quad In Half’

That said, it is impossible to deny that his best work is done in the weight room, and he returned there once again for an intense shoulder session. He recently shared a video to his Instagram where he was seen training with bodybuilder Regan Grimes, where he was able to do a 140lb shoulder press for a stagger 17 reps, scoring a new personal record in the process.

If you have been paying attention to Larry Wheels for any significant amount of time, you know that his ability to do massive incline presses is beyond reproach. This time around it was a rep PR, but he holds the unofficial world record for, at 225lb in each hand.

That said, there have been some who criticize this particular lift because of his range of motion. Those critics have looked at this video and said not all of those 17 reps count because he is not fully extending the arms.

This is not always the case for Wheels though, who posted another shoulder press video a few days earlier. This time around he was pushing the weight up to 154lb, but he still managed to knock out six reps, while using a full range of motion on each rep.

Whether you think that his reps were legitimate or not, it is undeniable that Larry Wheels possesses an insane level of power. It was good to see him get back to setting personal records and looking impressive in the process.

What did you think this recent post from Larry Wheels? What lifts would you like to see him hit next?