The exhibition boxing match between Hafthor Bjornsson and Simon Valley ends in a draw, while Hafthor sends an ominous message to Eddie Hall 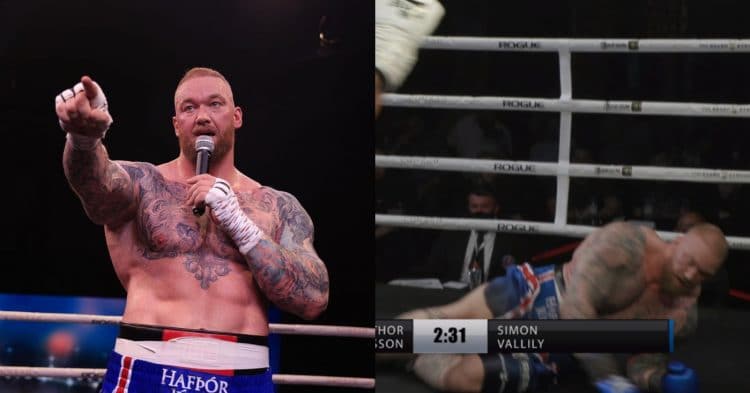 Hafthor Bjornsson had his second exhibition boxing match on Friday, May 28th, against Simon Vallily. Following the results of this contest, he has sent a vicious message to his rival, Eddie Hall.

When Bjornsson made the move from strongman to boxing training, he truly devoted himself to learning this new sport. Not only has he worked to improve his technique, but throughout the course of this process, he has dropped a ton of weight.

While his boxing match with Eddie Hall is still about four months away, Thor has been taking other exhibition boxing matches along the way. The first was against Steven Ward, which he felt gave him valuable experience.

On Friday, Hafthor Bjornsson had his second exhibition boxing match, against Simon Vallily. The original opponent was supposed to be Alex Simon, but Vallily stepped up after an injury forced him out of the bout.

Streaming on Coresports.world, the four round affair ended in a draw. However that does not mean it was a boring fight, by any stretch of the imagination, nor was it an easy out for the Mountain.

The first round was cautious enough, with both men testing range. However things changed in the second, when Hafthor Bjornsson got caught with a massive left hook that sent him stumbling back against the ropes.

He recovered quickly, and was able to dish out some hard strikes of his own, even sending Vallily to the canvas later in the round, although it was ruled a no knockdown, with the ref determining it was more of a trip instead.

The third round was more of the same, with Bjornsson getting cracked a second time, even dropping to the canvas himself, though again it was ruled a no knockdown. Then the third was back to a slower pace, with both men hesitant after the way things went in the previous rounds.

In the end, the exhibition match was declared a draw, which makes sense as it was not an official bout anyway. However after the fight, when speaking to the crowd, Thor assured fans that this was not how his fight with Eddie Hall would go.

“I promise you I’m doing everything I can to knock out Eddie Hall in September,” Bjornsson said after the fight.

This was a sentiment that Thor backed up on Instagram, a few short minutes after the bout ended. He posted a picture of himself in the ring, with an ominous message being sent to his rival.

“@eddiehallwsm Schedule an MRI now, because I’m knocking you out this September 💥🥊”

What did you think of Hafthor Bjornsson vs Simon Vallily? How do you think Thor will do against Eddie Hall on September 18th?