In a rematch of their lighthearted arm wrestling match from last October, Schoolboy was victorious over Larry Wheels again 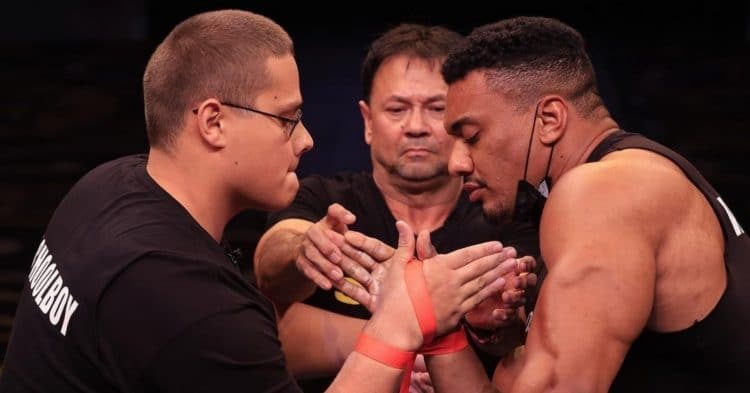 Powerlifter turned arm wrestler Larry Wheels wanted to test his mettle against famed arm wrestling champ Aleksandr “Schoolboy” Toproll for a second time. Unfortunately for him, the result was basically the same.

When Wheels decided to put the bulk of his focus into doing arm wrestling, he really dove deep into learning the skills to be successful. He brought in some of the best arm wrestling champions in the world to teach him, and he was soaking up information like a sponge.

The proof was in the pudding as well, as he was able to get the better of some people who were reasonably stronger than he is. Of course, we have seen him bested by foes in the past, but he took each experience as one to learn from, and keep getting better.

One of the people who got the better of Larry Wheels in training was famed arm wrestling champ Schoolboy. However the two each had individual injuries that left them not at their best for this face-off, so they decided to run it back, and do it in an official capacity.

So featured as part of the same event that saw Hafthor Bjornsson and Simon Vallily compete in a boxing match, Larry and Schoolboy went toe-to-toe a second time, in a match dubbed “King of the Table.”

However this time around, the result would be the same. Going six rounds, Schoolboy completely dominated Wheels, with the powerlifter being unable to score a single point.

Although things did not go his way, Larry was still positive after the fact. He posted to Instagram with a few pictures of he and Schoolboy, during the match, as well as the pair posing together, while discussing the big success that the whole thing was.

“The event was a huge success! You guys made this happen!” Wheels wrote.

While this may not have been the outcome he was looking for, Larry should feel no shame in his performance. Frankly, Schoolboy is one of the best arm wrestlers in the world today, and like the commentators noted, there is no doubt that Larry would have bested him at a powerlifting contest.

The fact is that arm wrestling, like anything else, is a skill that takes time to master, and a development of specific muscles. That being said, Larry Wheels is still incredibly strong, and it is clear that he put in the work to get as good as he possibly could for this match.