2018 World's Strongest Man Hafthor Bjornsson has made noticeable improvements leading up to his boxing bout with Eddie Hall later this year. 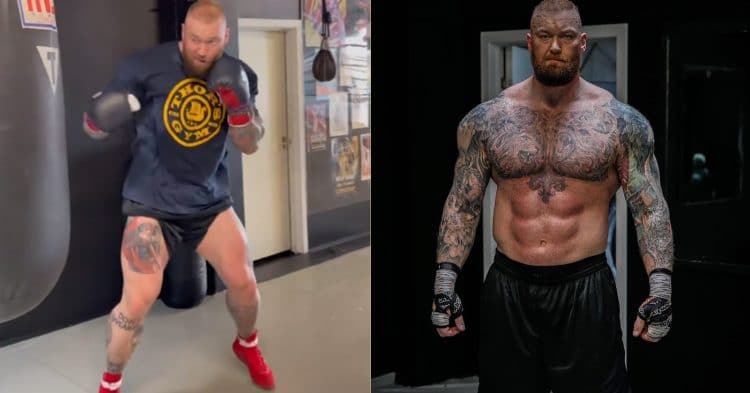 Retired Strongman Hafthor Bjornsson recently shared some training footage on social media of him working the heavy bag in preparation for his boxing bout later this year with fellow Strongman legend Eddie Hall, and he’s looking much sharper since starting training last year.

We’re just a few months out from the highly-anticipated and hopefully epic boxing matchup between these monsters. The two agreed to duke it out after a series of trash talk and bashing and both have been preparing ever since as if their lives depend on flatlining the other. Both have also made huge improvements in their skillset although Hall has some boxing experience while Bjornsson had none to start. But the latter has come a long way from looking uncoordinated to actually looking halfway decent on the heavy bag.

“After 12 brutal rounds this morning We decided to film something for you guys. Here I’m I working on the bag and my A frame. It’s crazy looking back and seeing all the improvements I’ve made since I started! Can’t wait to show you all what I’m capable of in September!“

His movement and punching technique have improved quite a bit, and he’ll need every little bit when he faces Hall in September 2021.

But he can still expect to receive an overwhelming overabundance of criticism from Hall, social media, and anyone in between which is to be expected. But make no mistake, Hall is certainly not excused from the insults either.

But when you consider Bjornsson’s 6’9″, 300+ lbs frame regardless of if Hall may have a little more training experience, preparing for a man of Thor’s stature is nothing to take likely.

Hall is 6’3, 300+ lbs himself though and both are clearly genetic freaks that have also both won World’s Strongest Man once and both achieved the all-time deadlift world record of which Thor currently boasts.

There’s no telling how this bout will go down but it will be a spectacle and the foes will have a chance to prove themselves in the ring.