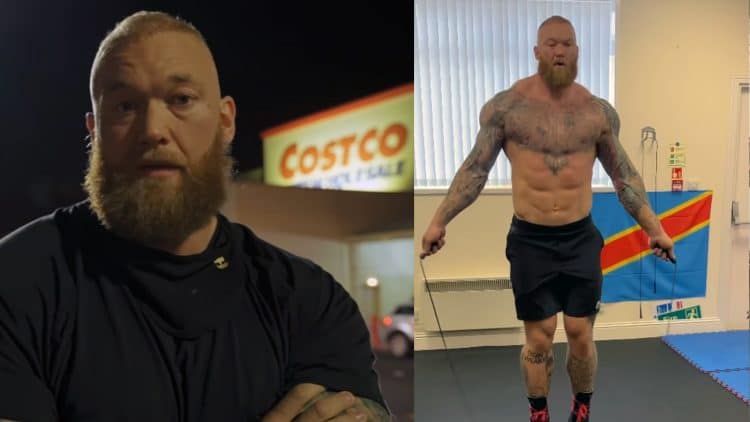 Hafthor Bjornsson is one of the greatest strongman competitors in the history of the sport. The 33-year-old has shown remarkable progress since transitioning to boxing as well and garnered widespread appreciation for doing it the right way. Of course, the new lifestyle has come with totally different priorities than his days as a strongman. Having lost nearly 100lbs in pursuit of a boxing career, Hafthor Bjornsson has significantly reduced his caloric intake down from the previous 8000-calorie strongman diet.

Bjornsson is currently in Glasgow, Scotland with coach Billy Nelson. During his stay, Bjornsson made a trip to Costco to stock up the supplies for his dietary requirements. Thor shared the video of this shopping trip on his YouTube channel.

Bjornsson includes a portion of blueberries and strawberries in his breakfast of eggs, oats, and flank steaks. On his first stop at Costco, he bought basmati rice, potatoes, and oats along with strawberries and blueberries. Later on, Bronson grabbed hold of spinach and potatoes in the produce section. Although he prefers regular potatoes, Hafthor Bjornsson’s diet allows him to swap them with sweet potatoes.

Bjronsson’s current diet does not include chicken, mainly because he does not enjoy it too much. His meat consumption has also been reduced to two portions a day from the previous five.  While stocking up the proteins, Thor added fish and steak to his cart. Thor thoroughly enjoyed ribeye during his strongman days. However, to maintain the necessary body composition for boxing, he opts for leaner cuts.

The final meal of Hafthor Bjornsson’s diet includes skyr, an Icelandic cultured dairy product similar to strained yogurt, mixed with berries, and a 30gm serving of almond or peanut butter. Both skyr and almond butter got a nod from The Mountain and he went on to add a large container of eggs to his cart.

Hafthor Bjornsson follows the stringent diet six days a week and enjoys a whole day of cheating once in a while. However, he resisted the temptation to buy the raspberry and white chocolate muffins and quietly walked past the pizza stand as well.

“Raspberry and white chocolate muffins! We really need this. Maybe on Sunday, I’ll come here, just to buy something. It’s a certainty,” Bjornsson said while placing the box of muffins back on the stand.

After wrapping up at Costco, Hafthor Bjornsson and Billy Nelson made a short trip to Costco Extra. They picked up berries, sauces, and chicken stock. Thor is not a fan of chicken and likes to stay away from it due to its dry and flavorless nature. However, he likes to cook the rice in chicken or beef stock to add more flavor to it. Nelson grabbed a box of Heineken at the very end of their shopping trip. Thor’s diet at the moment does not permit him to consume beer so it’s mainly for Billy Nelson.

Hafthor Bjornsson is set to fight archrival Eddie Hall in March 2022 to settle their beef once and for all. Both men have lost a significant amount of weight for the preparation of the fight. It will be interesting to see how the extensive training and stringent diet translates into performance.

Courtesy of Hafthor Bjornsson’s YouTube channel, you can watch the full video of his shopping trip here: