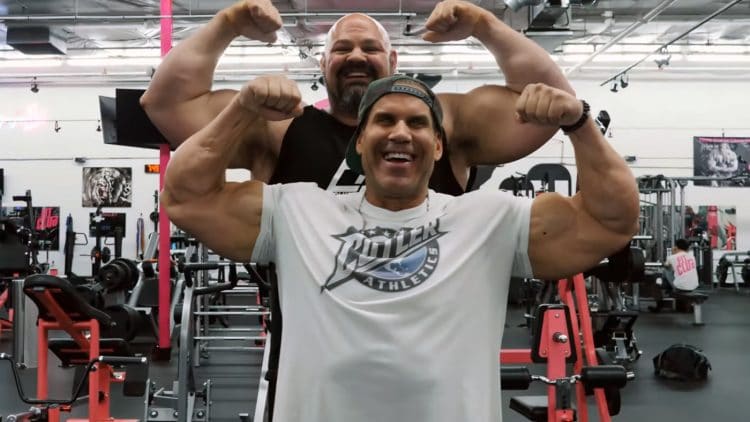 Strongman Brian Shaw is currently in the recovery phase after receiving A2M treatment for the hamstring injury suffered at the 2021 Rogue Invitational. However, that has not stopped the four-time World’s Strongest Man from traveling around the United States and adding more to his already vast base of knowledge. Recently, Brian Shaw joined hands with four-time Mr. Olympia winner Jay Cutler for an arms workout and shared the video on his YouTube channel.

At the beginning of the video, Jay Cutler stated that the workout was not going to be very different from Brian Shaw’s usual routine. However, he added that the techniques were going to be a little different due to the difference in their background.

“Reps are a little different. The weights aren’t as much as they used to be back when I was 300lbs,” Jay Cutler said.

Jay Cutler and Brian Shaw then proceeded to the gym with the goal to get as much blood in the muscles as possible and to get sore after the workout.

Jay Cutler prefers to start the workout with a fieldset of 10 to 12 reps to get a feel of things before going full throttle. He deliberately avoids the term ‘warm-up set’ and jokes that Las Vegas is warm enough for him to be warmed up heading into the gym. 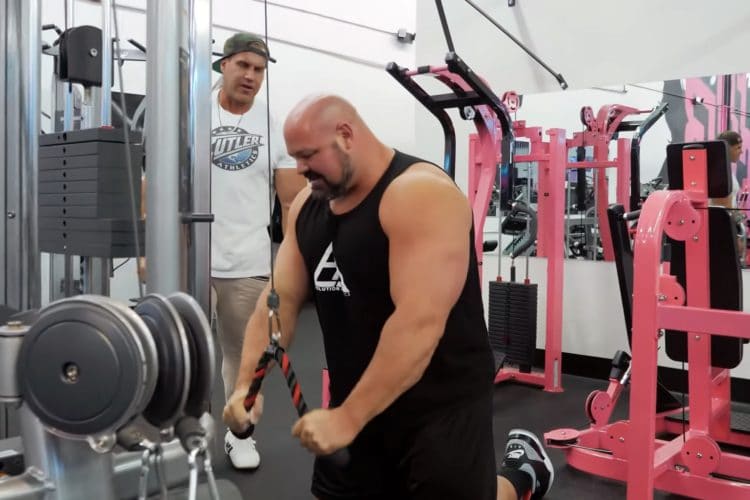 Bending forward to pull the rope down is a common mistake associated with rope press down. The result is a lesser contraction in the target muscles. Jay Cutler has tried to solve this problem by standing on his knees during this workout to stabilize the core to a greater degree. In addition to that, Cutler prefers explosive movements as opposed to a slow and steady pace.

Jay Cutler and Brian Shaw performed three sets of 12 to 15 reps with progressive overload before moving on to the next exercise. Meanwhile, Cutler said that, unlike most athletes, he has never had nagging injuries throughout his career. He attributes that to his habit of listening to his body and finding a way around the workouts that hurt.

“Every day was different. I judged them (workouts). I always had this rule, not every workout is a rockstar workout.” Jay Cutler said.

Jay Cutler stated that he loaded up to 245lbs on the bar during his bodybuilding days and while there were some concerns about skull crushers hurting his elbows, he has not had any issues so far. 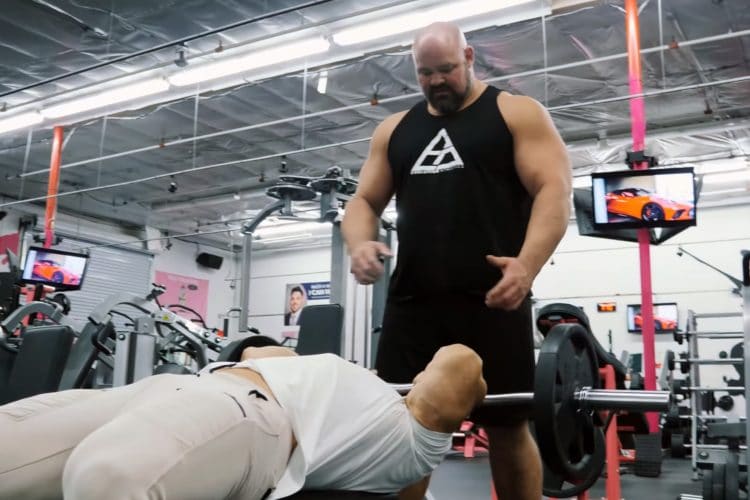 “This exercise I still do to this day. I feel this is the best probably mass exercise to build the density in the triceps.” Jay Cutler said.

Cutler does not rest his head on the bench during the exercise. According to him, the resultant increased range of motion helps to get the maximum stretch in the triceps. In addition to that, he maintains a close grip to get a better contraction of the triceps.

Two sets each of 12 reps later, Jay Cutler and Brian Shaw moved on to do triceps press down.

“I think the mistake that a lot of people do is they tend to do too heavy of movements to start out their routine where I like to ease a little bit. I’ve always done that. We’ve talked about the length of my career going without injuries and without joint pain.

I think you really have to get a little pre-exhaust into the muscle and that’s why we started with the rope because it’s not as much tension on the elbow.” 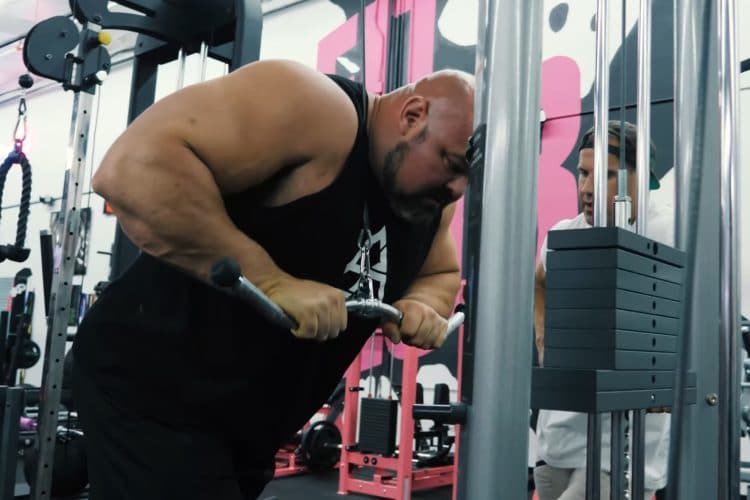 Jay Cutler added that triceps press down was going to be his heaviest triceps exercise of the day. In addition to that, Cutler uses a staggered stance and pushes his elbows out a little while pushing the lever down. While it may come across as a wrong way to do triceps pull down, the 48-year-old argues that he won Mr. Olympia four times with that. So, nobody can argue with him for this one.

The duo performed one set each of 12 to 15 reps to wrap up the triceps workout and went on to work the biceps.

While explaining his logic behind starting the bicep routine with this workout, Jay Cutler said:

“You should do this first set and you’re gonna get more of a pump because your triceps were pumped already. So, I have this thing with doing triceps before biceps.”

“I’ve always tried the split routines but I always felt the most successful of my routines were doing arms together. So, triceps and biceps.” 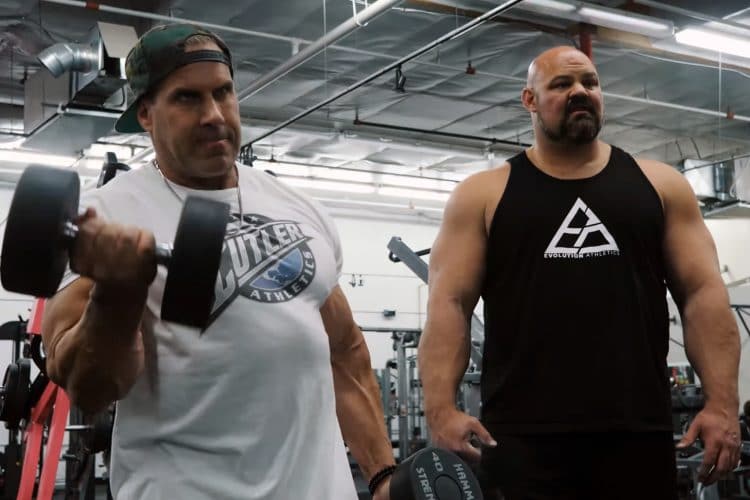 Again, Jay Cutler started the routine with a field set of 8 reps. In addition to that, he performed them with alternate arms rather than doing them simultaneously with moderate weight. Both men then went on to perform three sets each with progressive overload.

Jay Cutler performed the first set of this exercise and the shorter range of motion was immediately noticeable. The 4X Mr. Olympia winner elaborated on the technique he uses and said:

“Some people think that you need to come all the way up, okay? The truth is that’s taking tension off the biceps right? So, a lot of our rep ranges are fairly short. So you notice that I do stuff, it doesn’t look like I’m contracting. But actually, I feel the peak contraction.”

The front of your arm plays a big functional and aesthetic role in upper body movement. 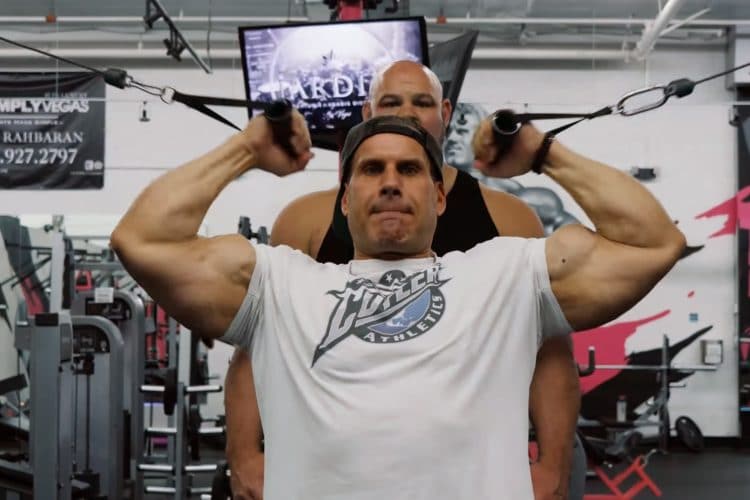 Courtesy of Brian Shaw’s YouTube channel, you can watch the full video here:

After wrapping up the workout, Brian Shaw was quite impressed with Jay Cutler’s approach and said:

“It’s interesting. I love the mentality with the warming up into the training. Then you kinda do the bigger, heavier thing after you’ve already got a good amount of blood in the muscle.”

The strongman-bodybuilder duo then wrapped up the workout with Jay Cutler showing interest in trying a strongman workout with Brian Shaw at some point.