Hafthor Bjornsson says that he would be open to a fight with Logan Paul, after he faces Eddie Hall 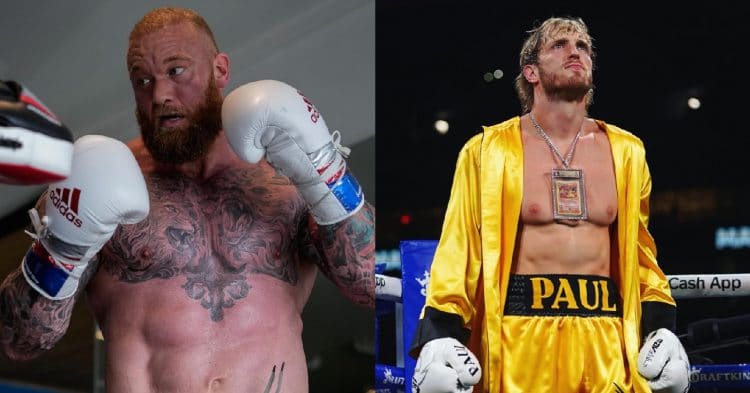 Hafthor Bjornsson has been making quite a name for himself for his ventures into the world of boxing. In fact, he recently said that he would be open to a fight with none other than YouTuber turned boxer Logan Paul, should the opportunity present itself.

Bjornsson made the switch from strongman the boxing after getting the deadlift world record last year, with the main purpose to be trying something new. Alternatively, he has had his sights on the fight with bitter rival and fellow strongman Eddie Hall, with the two set the square off this September.

Unfortunately, this bout is being delayed after Eddie suffered a bicep tear that forced him out of the contest, leaving Thor openly looking for a new opponent. While this would not be happening in September, Thor spoke in a recent interview to say that he would be open to a fight with Logan Paul, if the opportunity presented itself, following the YouTuber’s exhibition fight with Floyd Mayweather.

“Logan Paul is 188cm tall, I’m 205cm, so I think there was a similar height differences from Floyd to Logan as Logan to me, but probably more weight difference, though. But if he would want to fight me, I wouldn’t say no.”

Well it does seem hard to imagine that this fight would happen, Hafthor Bjornsson went on to show a ton of respect to Logan, and his brother Jake. He said that he admired the fact that both of these men were willing to put in the work to learn boxing, and put the health in the line by stepping in the ring.

Furthermore, he said that the Paul brother’s inclusion in the sport has been great for boxing itself. Having these two influencers has put a lot of eyes on boxing, with these new viewers being of a younger generation that otherwise may not be interested in the sport.

“The sport is getting much more attention for sure [because of the Paul Bothers],” Bjornsson explained.

“You know, boxing is always huge, boxing is huge. But getting two brothers like the Paul brothers, who have millions and millions of followers following them, it’s just gonna get more attention to the sport. So I think it’s a good thing.

“It’s a good thing, because they’re taking it serious as well. I’ve seen at the beginning a lot of criticism and stuff like that, but, you know, you have two young brothers that are very successful, very dedicated, and motivated,” Bjornsson continued.

“And I have to say, I’m a big fan of them, I’m fan of anyone that’s willing to take on new challenges, and of people who just work hard in general, and they work hard.”

As of right now, there has been no replacement opponents elected to face Hafthor Bjornsson in the ring this September, although Robert Oberst did volunteer himself for the spot. That said, it would be quite the sight to see the Mountain boxing against Logan Paul.