Eddie Hall shows his speed, power, and cardio in a boxing training session ahead of his highly anticipated grudge match with Hafthor Bjornsson 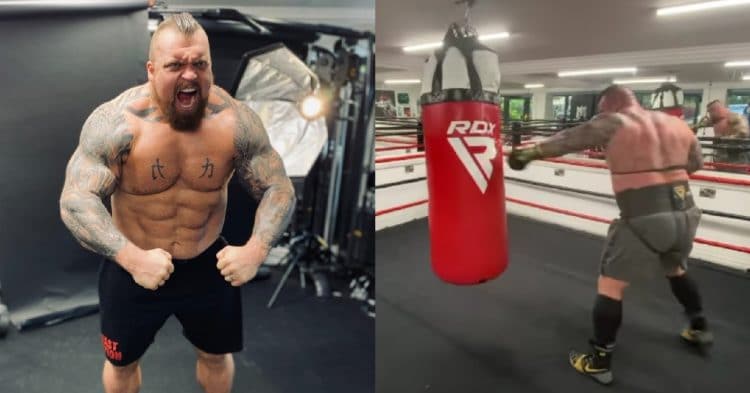 The boxing match between Hafthor Bjornsson and Eddie Hall is just two and a half months away. As the weeks tick away, the Englishman showed off his progress with a recent video putting his hands on display.

While we have see a lot from Thor in terms of his boxing training, with the Icelandic strongman even having a pair of exhibition fights, Hall has been a bit more secretive with his training. He shared a few updates early into the training camp, but for the most part he has kept his progress close to his vest.

However Eddie decided to change that with a recent post to his Instagram. Here the former World’s Strongest Man shared a video of his training in the ring, showing off his improved cardio, technique, and power as the fight with Bjornsson draws near.

“1000’s of hours in my basement just plodding away getting s**t done! My cardio level is insane and I loving my new passion for Boxing 😊 ❤️ RDX heavy bag weighs 150kg 🥊

To be clear, there is certainly some good things to take away from this footage from Eddie, especially as his actual boxing updates are few and far between. Namely, he looks to be faster than Thor, at least in this brief clip.

On the other hand, there is some questionable technique that Hall is showing, largely with the positioning of his hands while he’s not throwing punches. Ideally you would like to see hands be protecting the head, but his tend to drift towards his sides, which potentially leaves him exposed to punches.

Of course, nobody expects to see either Eddie or Hafthor with expert technique, but fans are left with just these brief training clips to make judgements on how the fight will go. Then again, with the type of power that both men possess, this fight could end in an instant, if either man lands clean on their foe.

There have been few fights in combat sports history, which do not involve actual boxers, that have as much anticipation as Hafthor Bjornsson vs Eddie Hall seems to have. This 8-round affair built on bad blood is set to go down September 18th, at the VyStar Veterans Memorial Arena, in Jacksonville, Florida with tickets having gone on sale on July 5th, and a PPV stream of the event being available for $9.99 on CoreSports.world.