The Olympia-winning coach had a close call but he's in full recovery after tearing a rotator cuff. 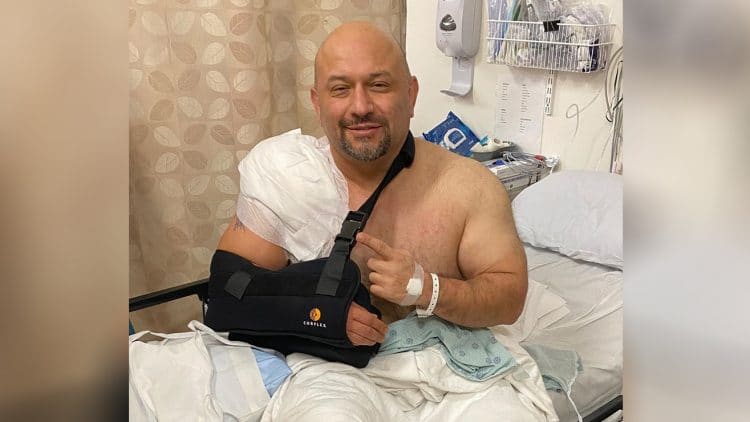 Hany Rambod, coach of 7x Mr. Olympia Phil Heath and Hadi Choopan (3rd place at 2019 Mr. Olympia) was recently hit head-on by a drunk driver during the 49ers vs. Green Bay Packers game and his wife was also in a truck as he explained on Instagram. But thankfully, both were OK and as far as we know, the other driver was OK as well. However, Hany did tear his right rotator cuff which happened after the wheel turned on impact.

He was thankful to have been able to get surgery as quickly as he did and now he has to look forward to rehab which he explained will not be easy but he’s right in that it could have been a lot worse, and he was also glad his son Kameron wasn’t in the truck during the accident.

“@missnaz and I were hit head on by a drunk driver in our Ford Raptor during the 49ers vs Green Bay Packers game. Thank God our son Kameron wasn’t in the Truck. Thank God Farinaz is OK. I braced myself with my right arm on the wheel while my left hand was on the horn. The Steering Wheel tuned on impact tearing my right rotator cuff. Thank you to Doctor Haber and his team who fit me in so quickly after the MRI results came back. The rehab won’t be easy but it could have been much worse.

This is Super Bowl weekend, please everyone don’t drink and drive. There are many options in this day and age. This weekend if you drink any amount of alcohol please use Uber, Lyft or a designated driver. Again this accident could have been way, way worse. Thank God it wasn’t. 🙏 #Blessed
#DontDrinkAndDrive

P.S. Thank you to @fordperformance for building the best damn truck (@ford Raptor) on the planet. If we were in any other vehicle the damage would have been far more destructive.“

The San Francisco 49ers and Kansas City Chiefs will face off tomorrow in the Super Bowl and although it’s always an exciting event for fans to get together and celebrate, those who choose to consume alcohol have a responsibility to ensure they’re not behind the wheel which Hany Rambod made sure to mention in his post.

But thank goodness Hany Rambod and his wife are OK after this scary accident, and he was also very grateful for the protection that his Ford Raptor was able to provide which he also added.

The bodybuilding community is still processing the exciting outcome of the 2022 Mr. Olympia contest. In a recent podcast, coach...

Hany Rambod On Training Chris Bumstead for 2022 Olympia: I Wasn’t Trying to ‘Reinvent The Wheel’

Canadian bodybuilder Chris Bumstead has enjoyed a meteoric rise in the IFBB Pro League. He is coming off a sensational...

Bodybuilding Hall of Famer Chris Cormier has become a revered analyst in the community, who regularly offers insight into the...