How does this pre-workout measure up?

Reviewed by Matthew Magnante
We select products we think are useful for our readers. We may earn money when you click on links on this page. View our disclosure for more details.
FacebookTwitterRedditFlipboardLinkedIn

The Ronnie Coleman Signature Series line is owned and operated by 8x Mr. Olympia Ronnie Coleman and his team. They sell all kinds of nutritional supplements and merchandise but one product in particular which stands out is their “Yeah Buddy” extreme energy pre-workout.

Well since you were curious, “yeah buddy” is actually a phrase that Ronnie Coleman used to say to himself before he took on a challenging lift. And so it’s no wonder there’s a special place in his heart for it and it was only fitting to name his pre-workout accordingly.

Let’s go over the product now, shall we…

Note: “Yeah Buddy” contains a high amount of caffeine and it should only be taken by those who have built up a strong tolerance to caffeine. Otherwise, serious side effects can ensue.
Warning: We don’t recommend this product for anyone suffering from any serious health issues.

We all know that without proven ingredients, there’s no supplement that can be taken seriously. So, let’s see what it’s all about.

As for the most basic of nutritional information, each serving of “Yeah Buddy” has 4 calories (which is really nothing), 1g (1%) carbohydrate, and 0 sugar.

Now onto the main ingredients which are categorized based on the effects each is supposed to have.

Ever notice how you feel all tingly (also known as paraesthesia) after taking a pre-workout? Well, that’s the beta-alanine working there. And there’s certainly nothing to be concerned about but this feeling can be attenuated by consuming in divided doses (1.6 g) or by taking beta-alanine in an extended-release form. (1)

But back to the ingredient, beta-alanine is a non-essential amino acid produced by the body and research has found that it does, in fact, have favorable effects on exercise performance when taken in doses of at least 4-6 grams daily for a minimum of 4 weeks.

Well, the patented Carnosyn is a superior form of beta-alanine compared to the generic beta-alanine. But, the Carnosyn in “Yeah Buddy” is dosed at 2g per serving which seems to be a little underdosed (not saying it won’t have any positive effects).

The Carnosyn website says that 90 grams over 28 days is the scientifically proven threshold for muscle-building and endurance effects; which comes out to about 3.2 grams per day. Then 6.4+ grams is even better for maximal performance benefits.

So, you’d probably have to take additional Carnosyn to get the full benefits in this regard. But that’s not to say the 2g won’t do anything for you…

Another amino acid, l-citrulline is produced in the body plus it’s found in watermelon, and its main function is to rid the body of harmful substances. But it’s becoming increasingly more popular for its effects on vascular function and exercise performance. (2)

The vascular effects likely stem from improvements in the L-arginine/nitric oxide pathway and chronic l-citrulline supplementation also decreases blood pressure and may even increase peripheral blood flow according to research.

And this is great for getting that pump in the gym due to the improved blood flow.

But it was concluded from the same research study that l-citrulline/watermelon supplementation potentially has major implications for individuals who have prehypertension and hypertension.

Not to mention, the evidence is clear that it does improve exercise performance in healthy individuals. So, not only is it an effective vasodilator but another study has actually shown l-citrulline to stimulate protein synthesis since it plays a pivotal role in protein homeostasis; which is essential for muscle hypertrophy. (3)

However, the effects are subtle but nonetheless there.

One review of clinical studies from 2014 explained that agmatine sulfate is an effective treatment for neuropathic pain and other evidence supports its use as a nutraceutical for similar uses. (4, 5)

But it’s often used in performance supplements as a nitric oxide booster however evidence isn’t as conclusive on whether it does, in fact, have positive effects on exercise performance even though it is created from arginine.

Choline is an essential nutrient that is needed for many functions like memory, brain and nervous system functions, gene expression, lipid transport, and metabolism and more.

And although the liver can produce some of this nutrient, it’s not sufficient for human needs and we need to get it from foods (mostly animal products, vegetables, beans, seeds, etc). But “Yeah Buddy” supplies 550mg which is considered adequate intake for adults (for women it’s 425mg/ day).

Choline deficiency is linked with liver and muscle damage, but it’s rare although most Americans don’t get enough through diet. (6)

But evidence is insufficient to suggest that choline supplementation has positive effects on cognition in healthy, young individuals. (7, 8)

However, getting in additional choline through diet doesn’t seem to hurt anything and it may possibly be beneficial just to keep levels in a healthy range.

Theacrine is an alkaloid with a similar structure to caffeine although its effects aren’t quite as pronounced. Research shows that it does have a positive effect on endurance and when combined with caffeine the impact on cognitive function is even greater.

This same piece of scientific evidence also found that the cognitive benefits of caffeine are also greater as a result. (9)

Caffeine is the one ingredient in all potent pre-workout supplements which is responsible for the majority of increased energy and the “bouncing off the wall feeling”. It’s a nervous system stimulant that occurs naturally in 60+ plants (e.g. beans, leaves, etc).

Well, caffeine anhydrous is a processed, dehydrated form that comes from the seeds and leaves of coffee plants; which results in a highly concentrated form of caffeine.

But as far as the positive effects of caffeine on performance and cognitive function, well… the evidence is there. (10)

In fact, one study of nine trained cyclists who were given 250mg caffeine 60 minutes prior to the ride followed by another 250mg at 15-minute intervals for the first 90 minutes; significantly increased work production by 7.4% and Vo2 by 7.3% compared to control. (12)

Also, there were no changes in perceived exertion.

But what this study also found was that the 90g of glucose polymers ingested had no effects on workload and Vo2. Therefore, the caffeine had a much more pronounced effect.

Another study found that caffeine could enhance the performance of sustained high-intensity exercise by increasing running speed and Vo2. (13)

Some research also suggests that caffeine could aid in weight loss because it increases energy expenditure dose-dependently and has a thermogenic effect on the body. (14)

And there are many studies which show performance improvements with the consumption of caffeine.

But… one should not consume other caffeine products while taking “Yeah Buddy” as it does contain 420mg and the upper recommended limit is around 400mg, even though some people may be able to get away with slightly more.

Although, this pre-workout does have time-release caffeine so it shouldn’t hit all at once. Consuming too much caffeine can cause serious side effects and you want to be sure you’re staying within a safe range.

Also, if you have not built up a tolerance to caffeine then this probably isn’t the product for you as we noted previously.

Apparently the “Yeah Buddy” Bomb is like the grand finale… it contains a few different ingredients for performance support but we’ll give a brief explanation of each one.

A protoalkaloid, synephrine has been shown to increase metabolic rate (resting metabolism) and energy expenditure and when take alone or in a multi-ingredient supplement, modest weight loss has been observed. (15)

Also, evidence is sufficient for its safety when taken in typical dosages.

Higenamine is an herbal constituent which is thought to act as a beta-2 agonist, used for fat-burning and energy-increasing purposes. And it’s often used to substitute Dimethylamylamine (DMAA) and ephedrine which are now banned substances.

According to research, higenamine stimulates lipolysis and energy expenditure which is ideal for fat loss. But unlike caffeine and yohimbine which were two other ingredients used in the same study, it shows little effect on heart rate and systolic blood pressure increase.  (16)

Although, taking more than recommended can potentially have adverse effects. (17)

Phenethylamine acts as a nervous system stimulant functioning as a neurotransmitter to increase focus, attention, and other cognitive functions. It occurs naturally in the brain and body.

A plant drug in Ayurvedic and Unani medicine, Adhatoda vasica has a long history of use to improve breathing, bronchitis, congestion, allergies, cough, heavy menstruation and much more.

Although there isn’t much about this ingredient for performance, we’d assume it was used for respiratory purposes.

One study of top-level soccer players found that yohimbine showed no significant improvements in body mass, muscle mass or performance. However, significantly more fat loss was achieved with yohimbine supplementation over the placebo group. (18)

Other studies support its effects on fat loss although there are some studies that show no benefit for this purpose.

One study showed no benefit for the treatment of obesity when 19 volunteers were given 18mg a day and placed on a hypocaloric diet for 8 weeks. (19)

So, it’s safe to say research is mixed on its efficacy for fat loss although it may still be worth taking for the potential benefits from the supportive studies. Also, there are always different variables when it comes to studies.

So, there would likely need to be more research on this compound to come to a better conclusion with more variables taken into consideration.

Yohimbine may also be beneficial for sexual enhancement due to increased nitric oxide. However, it’s not typically recommended for this purpose due to the potential for adverse side effects. (20, 21)

This pre-workout definitely contains several ingredients that have been shown in studies to have an effect on performance in some way. But at the same time, some ingredients lack sufficient evidence to conclude that there is any type of positive effect/s.

And this isn’t necessarily a bad thing because as we mentioned previously, not all studies consider all variables. However, if there’s a consensus for a lack of benefits when it comes to scientific literature, then we tend to lean more on the side of there not being much of a use for an ingredient.

The product is decently priced compared to other pre-workout supplements on the market. You get 30 servings for around ~$19.

Reviews seem to be mixed overall with many who love this pre-workout due to the kick that it gives. But compared to other products there have been many unhappy users due to the not so great taste, clumping, drop in quality, and more. 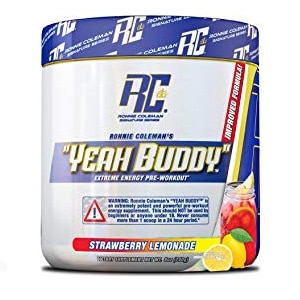 It doesn’t seem to be among the creme of the crop where pre-workouts are concerned but it does have a few positives which might make it worth trying out.

Matthew Magnante
Matthew Magnante is the senior writer for Fitness Volt. He has had a passion for fitness since elementary school and continues to research and learn how to build muscle effectively through training and diet. He also loves to help others to achieve their fitness goals and spread the knowledge where needed. Matthew's other passions include learning about mindfulness, strolling through nature, and always working to improve overall.