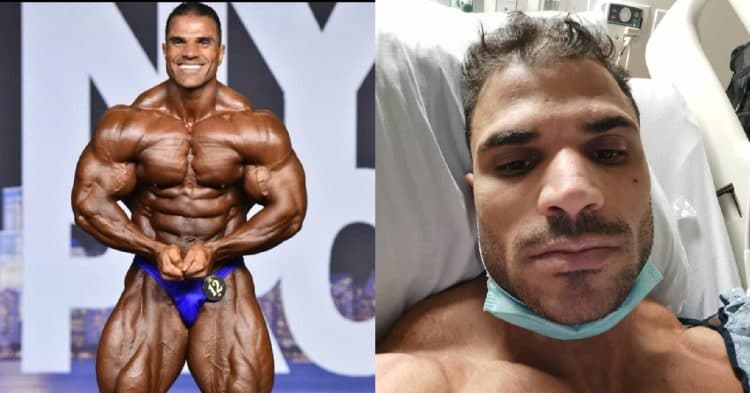 Last weekend, Hassan Mostafa was able to score fourth place at the New York Pro. However almost immediately after, he was forced into the hospital with a nasty infection.

When he took the stage at the 2020 New York Pro, Mostafa did so as an interesting prospect who seemed to have a lot of potential. To a certain extent, he would deliver on this as well, taking home a respectable fourth place from the show. Although some people feel that the judging was a bit mishandled at this contest, most were impressed by Hassan, feeling that he was going to have a lot to offer the sport moving forward.

Following the contest, Hassan Mostafa was hoping to make a quick turnaround and compete at the California Pro this weekend. However this was almost not able to happen, as it seems that he was forced into the hospital as soon as he landed back in Las Vegas, following the New York Pro. A post to his Instagram revealed this to be the case, as he apparently had an issue with hemorrhoids that he got upon landing in Florida last weekend, which eventually caused an infection, resulting in his trip to the hospital.

“Thank God I’m much better and doctor cleared me to do the show on Saturday! I hope I come in good shape. Thank you so much for all the prayers and thoughtful messages🙏”

Before posting this update in the hospital, Hassan explained how much pain he was in during the previous show. He said that this was his first time dealing with hemorrhoids, and the pain he was in was nearly unbearable. He attributed this as the reason for some of the less impressive aspects of his appearance on stage, explaining that he had a hard time holding poses and smiling.

“I wanted my first post after NY Pro to be a clarification of what I went through during the last few days. Since I’ve seen many people negatively critique my stage presence and my posing, I’d like to tell you that a few pictures online don’t tell the whole story. I was simply in so much pain during the show it made it almost impossible to enjoy any of it. I’m just grateful I was able to suck it up and pose anyway because many times I wanted to run off stage from the extreme pain. Unfortunately, after I landed in Tampa I got hemorrhoids for the first time and I had no idea how to respond to it. And for anyone that experienced them knows how extremely painful they are. Especially with the constant posing practice and stress leading up to the show, my condition worsened day after day. And by the finals of the show I was barely able to walk from the swelling. So please, if you want to give advise about my smile, or my walk, or my confidence, I’m here to tell you that I’m working really really hard to make improve, but sometimes things outside our hands take over and make these little adjustments almost impossible. Finally, for those who supported me and showed nothing but respect and love, I want to say THANK YOU, you’re the reason why this sport is a great one!!!!!!”

It is good to see that Hassan Mostafa is doing better and still able to compete at the California Pro. It will be interesting to see how he looks compared to last weekend, especially if he is feeling better now. This was a serious issue and it is good that he got it fixed.

How To Watch 2020 CrossFit Games