Heather Connor performed the heaviest raw deadlift of her career in a recent training session. 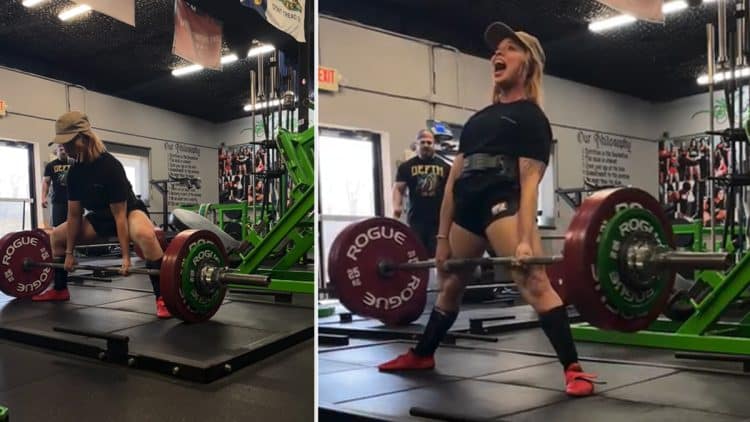 There is no doubt that Heather Connor is one of the best pound-for-pound deadlifters in the entire IPF, but she is still far from reaching her peak. Competing in the 47-kilogram weight class, there is no one who can rival Heather when it comes to deadlifts. So, she only aims to improve her personal bests and World Records. Additionally, Connor has once again succeeded in achieving her goal, as she deadlifted 202.5 kilograms (446.4 pounds) in a recent training session. Seeing that this is her new PR, as well as an Unofficial IPF World Record, Heather was delighted to share the video footage on her Instagram page.

Having only equipped herself with a lifting belt, Heather Connor’s recent deadlift would be deemed raw in a sanctioned powerlifting competition. In addition, she used a sumo stance and a mixed grip to lock out 4.3x her bodyweight.

Heather Connor did not just Unofficially break the U47KG IPF World Record, but she instead smashed it. The record officially stands at 185 kilograms (407.9 pounds), as Heather herself set it at the 2022 IPF World Classic Powerlifting Championships. Even though it has only been five months since then, Heather now locked out 17.5 kilograms (38.6 pounds) more.

Heather Connor has been making massive progress for the past few months, that is ever since she failed to win the title at the 2022 IPF World Classic Powerlifting Championships. Tiffany Chapon managed to outperform her, but that has been serving as a serious motivation for Heather. So, she will be aiming to reclaim her title in 2023.

Heather Connor has previously won the 2017 & 2019 IPF World Classic Powerlifting Championships. Those are just a glimpse of Heather’s incredible career, as she took part in 23 sanctioned competitions and won 16 of them.

Less than 4 pounds separate Heather Connor from getting the incredible 450-pound deadlift milestone. Not many women’s athletes have managed to lift that much weight, but considering that Heather only weighs 47 kilograms (103.6 pounds), it makes it significantly more impressive