Cutler and Sarcev are unsure if Hunter Labrada has improved enough to deal with the new physiques of William Bonac, Nick Walker and Samson Dauda. 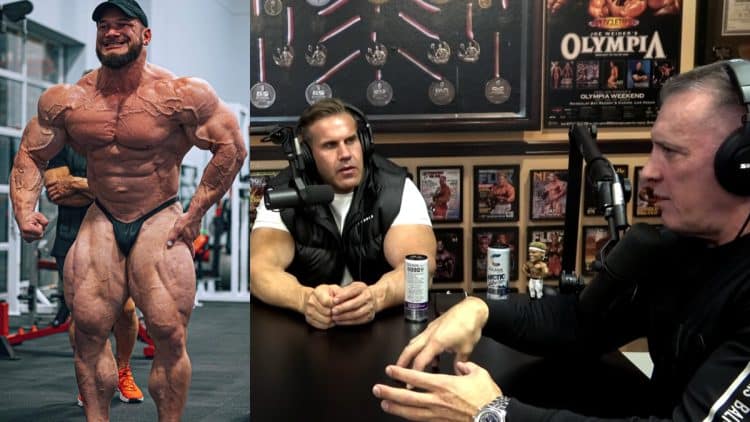 The 2022 Mr. Olympia contest takes place in under one month, prompting Jay Cutler and Milos Sarcev to break down the Men’s Open lineup. In a recent video, Cutler and Sarcev discussed contenders at this year’s contest and the ‘vast improvements’ Hunter Labrada has to make to find success.

Last year, Hunter Labrada managed to place fourth at 2021 Mr. Olympia. En route to the impressive performance, he was challenged by rising contender Nick Walker, who continues to make strides as he prepares for his second Olympia competition.

While Labrada surpassed Walker on the scorecard last year, many including Walker disagreed with the outcome. However, four-time Mr. Olympia Jay Cutler had his own thoughts about the rivalry. He believes Hunter’s physique was aesthetically more pleasing than Walker’s. Reflecting on the show, Cutler mentioned that Labrada’s shape carried him to victory against “The Mutant.”

Rookies like Andrew Jacked and Michal Krizo have made waves this year in the IFBB. Meanwhile, tons of heavy hitters from 2021 have ambitious plans to dominate as well. In their latest video, Cutler and Milos Sarcev are looking closely at some of these threats who might shake up the competition.

During the podcast, Sarcev and Cutler questioned Hunter Labrada’s chances at the upcoming contest.

“It’s very hard for me to see him moving up but it’s possible. I don’t see him beating Ramy and Hadi Choopan — William Bonac — I put him there as high as second because I believe this is going to be the best Bonac we’ve ever seen.

Dennis James says he saw him live and it was freaky, oh my God. Considering all that stuff, Hunter [Labrada] is way wider, way more aesthetic in sense of x-frame, v-taper, shapely but we mentioned this, he was never never never in Olympia conditioning. He was in so so condition last year we all agreed that how could he possibly actually get away with this kind of conditioning and place fourth,” Milos Sarcev added.

Cutler doesn’t believe the reigning champion Mamdouh ‘Big Ramy’ Elssbiay will have a problem winning another title. If Labrada isn’t ‘vastly improved,’ bodybuilders like Nick Walker and William Bonac will capitalize at the show.

“He [Hunter Labrada] needs to vastly improve from what he was last year. He’s definitely better. Like, he’s got the shape and he’s got the poses. I just think that he definitely needs to bring a different package because Walker has improved and like I said, I think with Ramy, we’re talking second forward pretty much right now. I still believe Ramy is in his own division right now,” says Jay Cutler.

“Bonac has improved. Yeah, but that doesn’t mean he’s going to beat the guys that beat him last year. Anyone can look great at five weeks, six weeks, four weeks — you know how it goes. Hunter needs to improve. I have a hard time putting anyone outside of the top four from last year.”

After praising Bonac, Cutler refused to count out Brandon Curry.

“Even, I know Bonac was sixth. I don’t know man. I would hate to shift them. I don’t want to count Brandon [Curry] out. I think he’s 40 this year. He’s definitely coming into those years of questionable, how much longer is he going to go. I think [Derek] Lunsford can be very dangerous to that top five,” says Cutler.

Sarcev Says Samson Dauda Will Be A ‘Major Factor’ At 2022 Olympia, Believes Andrew Jacked Is The Future

Sarcev, who trains Samson Duada, believes with proper conditioning Samson is hard to compete with given his freakish size.

“Samson has a combination of everything: round muscle bellies, shape, thickness, crazy legs, crazy chest,” Sarcev said. “You know when you improve conditioning, you are noticed already by the IFBB. He [Samson] is noticed. So, if he comes greatly improved in conditioning, he’s going to be a major factor,” Sarcev told Cutler.

Before ending the conversation, Sarcev and Cutler agreed Andrew Jacked has Mr. Olympia potential even if he doesn’t reach that goal this year.

“Andrew Jacked we were shocked by, and we both said he could possibly be Mr. Olympia. Crazy shape,” Sarcev said.

Initially, Cutler thought Jacked could take on Big Ramy in December but realized he still needed to bring up his back when he saw him at the 2022 Arnold UK.

“I’m going to admit. I’m going to say on record,” Cutler said. “I thought Andrew Jacked could be the first guy to come in and win it first time.

I thought he could really challenge Ramy. Of course, then Ramy’s crazy ass pictures shows up online and he looks ridiculous. I don’t know if I said it online, but once I saw him in U.K and realized he still needs a little back work conditioning-wise, I haven’t seen it yet. I hope he can fulfil the potential, we, you and I have discussed right,” says Cutler.

The last time Cutler dissected the Men’s Open lineup at 2022 Olympia, he suggested Slovakia’s Michal Krizo might reach the first call-out in his debut at the event. He believes Krizo’s overwhelming size could catch quite a few bodybuilders off guard when they meet face-to-face.

With over 30 Men’s Open competitors expected to compete, Cutler predicted this Olympia contest to be one of the greatest. Cutler and Sarcev agreed bodybuilders like Hunter Labrada will struggle if their improvements aren’t noticeable to the judges in four weeks.