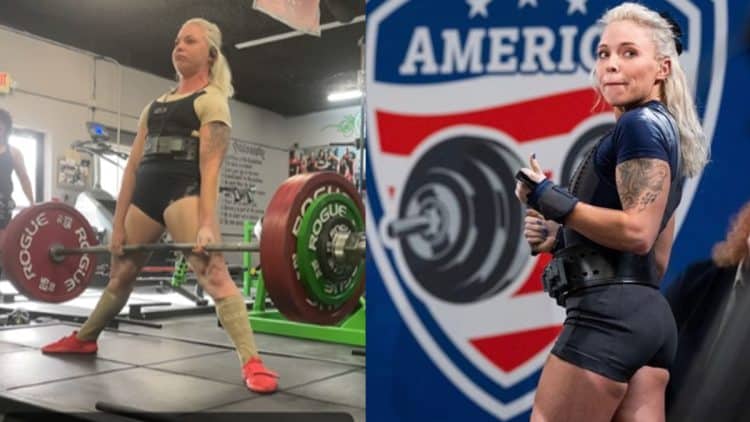 Two-time IPF World Champion, Heather Connor, is currently riding a wave of momentum that is seeing her perform some of the most impressive lifts of her career. Just a few days ago Heather crushed a 152.5-kilogram (336.2-pound) raw squat PR, but she did not let that stop her from setting more records. Heather’s greatest prowess is in the deadlift event, as she has gained a reputation of being the greatest pound-for-pound female deadlifter in the IPF, and she has now gotten even better at it. On September 01, 2022, Connor shared a 200.5-kilogram (442-pound) raw deadlift PR.

Heather Connor only used a lifting belt to complete the new 200.5-kilogram (442-pound) deadlift PR. Her style of deadlift combined a sumo stance and a mixed grip.

Heather Connor’s bodyweight at the time of the lift was just below 48 kilograms (105.8 pounds). So, her new deadlift PR was around 4.2x her bodyweight, which almost makes it hard to believe that she could achieve this feat.

Heather Connor also captioned the video with “430.5kg training Total!”, and this total would also be 4 kilograms (8.8 pounds) heavier than the U47KG IPF World Record. Tiffany Chapon holds the current record, having totaled 426.5 kilograms (940.3 pounds) at the 2022 IPF World Championships.

Heather Connor has won 15 out of her 22 sanctioned powerlifting appearances, which included two IPF World’s and numerous National championships. She is now openly chasing her third World Champion title and is more motivated than ever after missing out on it this year.

Due to her record of achieving the impossible so many times, Heather Connor finds it very difficult to surprise anyone at this point. She is now chasing Tiffany Chapon, who seems to be her biggest rival so far. With every passing day, Heather continues to improve and is gradually regaining her position as a favorite for next year.