Powerlifter Heather Connor meets one of her own personal goals with a truly inspiring deadlift of 200kg/440lbs. 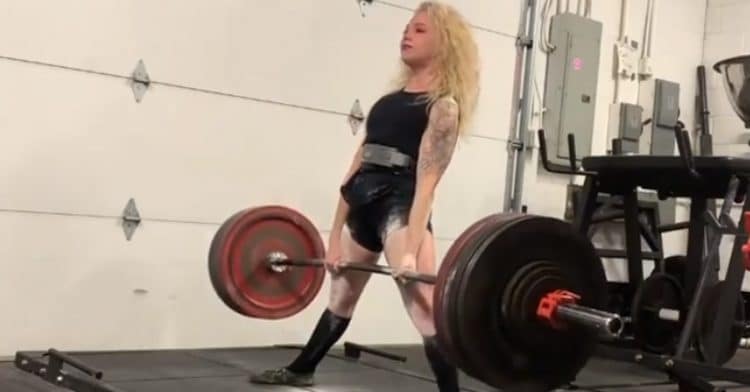 Leave it to inspiring athletes to show us that it’s never too late to make New Year’s resolutions, even if you are just calling them personal goals. That’s what happened with two-time IPF 47 kg World Champion Heather Connor, who decided she was going to lift 200kg/440lbs by the end of 2020. And she did.

Heather Connor’s records have her powerlifting in the 47kg category. When she pulled her recent deadlift, she posted she was pulling at a bodyweight of 45.6kg/100lb.

Heather’s personal best according to Open Powerlifting is 185kg/407.8lb. That happened at her most recent competition, on September 26, 2020.

In that post, she talked about not forgetting the “yet” in creating personal goals. She said she’s not afraid of failing in front of anyone, but she says,

“What I am afraid of is not trying….Don’t forget your yet when speaking upon your failures. Allow these moments to help you grow stronger: mentally and physically. I didn’t lift 200kg YET. But it’s coming.”

Heather Connor Closes 2020 With a Win

By New Year’s Even 2020, Heather Connor was posting that she got the win with the 200kg. She said,

In this lift, Heather is using the sumo stance, a common strategy for her. She makes women powerlifting at four times her bodyweight appear effortless. During the attempt, she weighed 45.6 kg (100 pounds).

This new weight is 15.1kg/32.3lb higher than what she pulled at the 2020 USAPL Palmetto Classic in California on September 26. She is noted as the only woman to have pulled over 400lb in competition. If she had been competing with the New Year’s Eve pull, it would be a new world record.

It certainly looks like she has the drive to set a new record in her next competition.