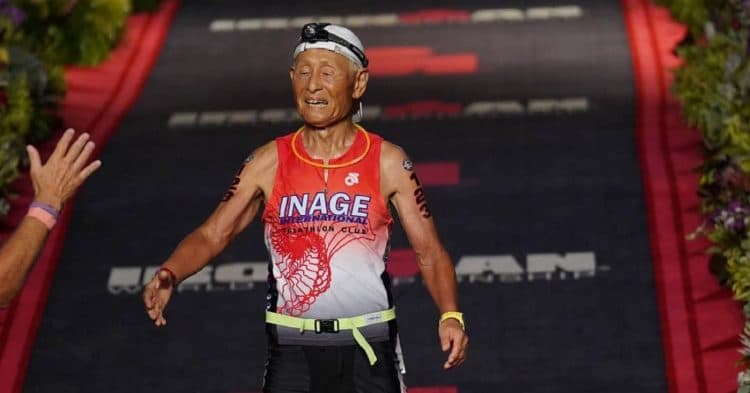 Hiromu Inada may be approaching his 90’s, but he is not letting this age define him. He proved this in a massive way, when he completed the Ironman World Championship, and being the oldest person to ever do so.

By 87 years of age, most people are reaching the end of what they can achieve physically. However when Inada was 87, back in 2018, he was proving quite the opposite to be true. He did this by earning his way into the Guinness Book of World Records for being the oldest man to complete the Ironman World Championship, which consists of the following exercises, completed back to back:

For Hiromu Inada, he had already become the oldest person to do this challenge, in 2016, when he was 85. However he decided to push this record even further two years later, when he did the challenge again, in Kailua-Kona, Hawaii. He managed to do just that, with a completion time of 16 hours, 53 minutes and 49 seconds, while being 87 years and 328 days old.

Congratulations to Hiromu Inada who have achieved a new @GWR title for oldest person to complete the IRONMAN® World Championship!! We are proud of you and the achievement👏 https://t.co/e8WhIsPxeD@IRONMANtri @worldtriathlon
Triathlon Japan NEWS📰https://t.co/QloIW9pXhB pic.twitter.com/XDWOjufYVS

This was an incredible accomplishment for Inada, who was formerly a television reporter. Speaking shortly after the race, he admitted that it was difficult for him to finish the triathlon. However he pushed through, channeling inspiration from his supporters around the world.

“It’s an extremely tough race for an old man like me. I can barely finish the race,” Inada said. “The Ironman race is perfect for seniors. It’s all about endurance and gunning persistently until the end.

“I hope everyone can see and be encouraged that you can do the same thing as the younger generation, even when you age.”

There is no denying that Hiromu Inada is a massive inspiration to anyone who feels like they can not do something, just because they are old. He is another prime example that age is truly just a number, when it comes to athletic endeavors.

Chad Penson recently posted a massive squat from training, which made it clear that he would also perform amazingly at...