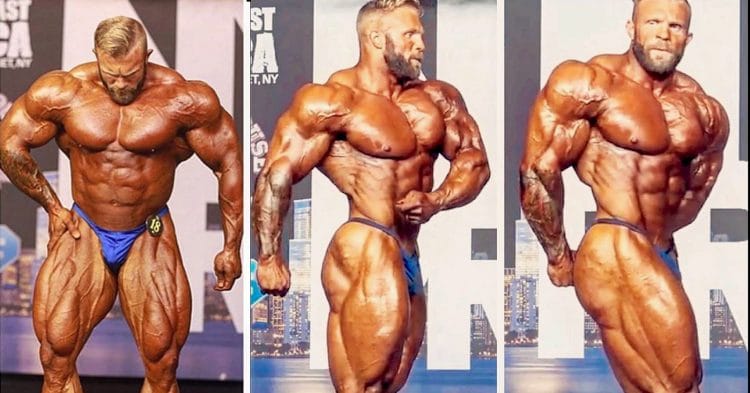 When Iain Valliere won the 2020 New York Pro over the weekend, a lot of fans were unhappy about it. After taking some time to think things over, he has decided to fire back at the critics and voice his opinions on the show.

Leading into the New York Pro there were a ton of exciting things to look forward to about the show. A variety of athletes took the stage with impressive physiques that they had been working hard on over the last several months. In the end, Valliere was able to do enough to secure the victory, even beating the likes of Justin Rodriguez, Jon Delarosa, Maxx Charles, and Patrick Moore. However many people were not happy about this outcome, feeling that Iain’s physique left a lot to be desired, and that other athletes were more conditioned that he was.

These hateful comments have gotten back to Iain Valliere, and he is not happy about it. Taking to Instagram with a lengthy message, he expressed his displeasure with the backlash he had been facing. Moreover he opened up about how much it bothered him that he had been working hard to get better, but that it did not seem like enough for fans.

“It’s tough to wake up after a win that should be the highlight of my bodybuilding career to so much negativity in the comments about the show. It’s easy for people to say “who cares what they say” or “you’re above that don’t listen to these keyboard warriors” but when you work for over a decade and finally achieve a win as prestigious as the New York pro, you really hope to be able to revel in it. It seems like no matter what I do I’m doing something wrong in the eyes of the social media world.

According to it in 2018 I was being overlooked, and now that Im improved and placing higher, I don’t deserve it? At the end of the day I have full faith in the judges and the IFBB Pro league who are there 10 feet away, do this professionally, and are much better versed in the criteria they are looking for than those on Instagram. I take their critiques and try and apply them to each and every show.

I know everyone is entitled to their opinions and I respect that whole heartedly, but I can’t lie and say that reading the comments doesn’t hurt. Either way I’m extremely proud and thankful for what I accomplished last night and I can’t wait to take these most recent feedback and apply them for the Olympia.

And here is some shots to show that some crappy IG pics don’t always show the whole story lol.”

It is certainly understandable that Iain Valliere would be disappointed by the fan reactions after this win. Although there is something to the idea that his calves and triceps had some room to grow, nobody else at the contest was so much better that it was clearly a bad decision to pick him as the winner. The fact is that he has some attributes that were better than others, even where there was room for growth.