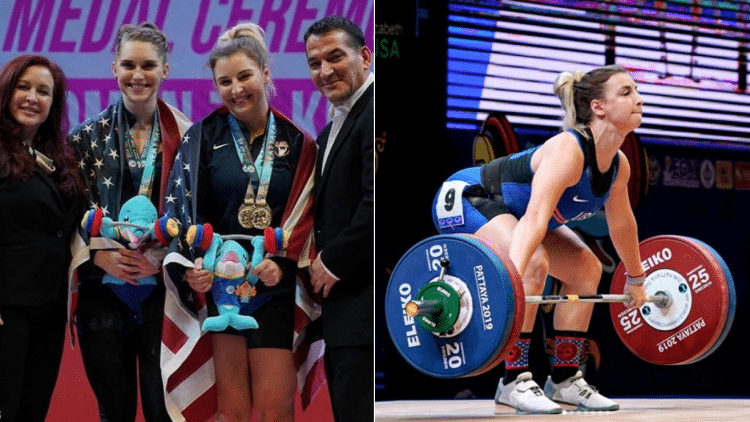 Katherine Nye continued her impressive run at the IWF World Championships over the weekend. This is how all the action shook out.

Nye took to the 2019 IWF World Championships in the 71kg weight division. She had been on a run as of late, putting together some impressive performances. As a result, the expectations were high from this Team USA product, leading into the competition.

However, Nye is not the only Team USA competitor to compete at this event. She was alongside Mattie Rogers, who was also looking to make a name for herself. The two women shared the podium for all three events, an impressive accomplishment since no two USA athletes have shared the podium once in over 30 years.

However, it was the dominance of Katherine Nye that stole the show. She earned gold in all three divisions, whereas Rogers took two silvers and one bronze. Subsequently, at 20 years old, she became the youngest Team USA women’s athlete to win a senior World Championship. This is the result from all three events: snatch, clean and jerk, and total.

In the snatch, Rogers was able to land 103kg, and 106kg, in her first two attempts. However she failed on her third attempt, going for 108kg. Nevertheless, she earned bronze for her efforts.

Kim Hyo Sim, out of the People’s Republic of Korea was expected to be a tough challenger headed into this competition. In the snatch, she certainly delivered, going head to head with Katherine Nye. Nye missed her first attempt, at 106kg. However, she came back to earn 107kg in her second run.

Despite that, Sim would not be deterred, scoring 110kg in her second turn, putting pressure on Nye. Therefore, Nye had to amp things up, and went for 112kg, which she managed to nail. Subsequently, this set a new Junior World, American, and Pan American Record, along with a Senior American and Pan American Record. As a result, Sim looked to beat her out with 113kg, but was unable to land her final attempt.

During her first attempt in the clean and jerk, Rogers nailed 130kg, while Nye scored 131kg. Their second attempts saw Rogers with 134kg, and Nye with 136kg. Rogers would try to go for 137kg on her third attempt, but came up short. Following that, Nye decided to try to earn a new Junior World Record in total, by going for 141kg, but unfortunately came up short.

All in all, this was a phenomenal showing from Team USA’s 71kg division. They proved themselves to have some of the strongest women in the world. With people like Katherine Nye and Mattie Rogers at their head, they will be a force to be reckoned with at the 2020 Tokyo Summer Olympics