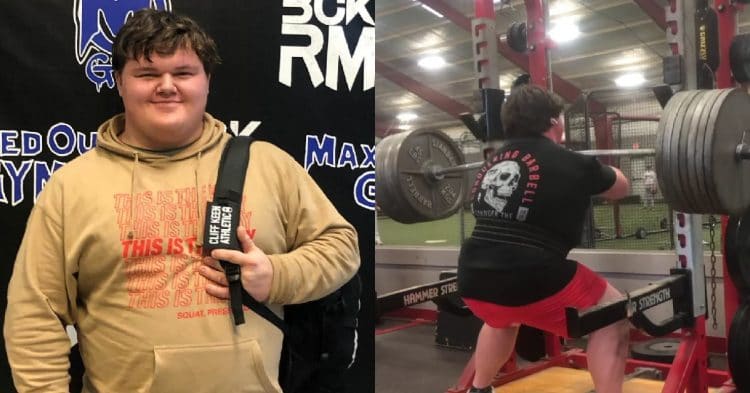 Jackson Powell is one of the most promising of a growing list of teen powerlifting sensations. He was back at it again recently, absolutely destroying a massive front squat.

Powell is a 17-year old powerlifter, out of Tennessee. However, as we have seen, he is not your ordinary high school junior. Although he has only competed twice so far in his young powerlifting career, each time has been incredible. In particular, his performance at the Tennessee Open in January saw him shattering four records at the same time.

Since then, it seems that Powell, who has been lifting since he was seven, has only gotten better. This was no clearer, than with a recent post to his Instagram. The video he shared actually saw him move away from the traditional squat, bench, deadlift combo he uses in competition. Instead, he is seen hitting a gigantic 675lb front squat, breezing through it like it is nothing.

Sure, the form left a little to be desired, but this is something Powell is aware of. Regardless, this is a massive amount of weight, especially for someone his age. On the other hand, he is still staying busy with getting his squat numbers up for competition. Here he is a few weeks earlier, hitting a 785lb triple, which is only about 35lb shy of his competition max.

Powell is most certainly starting to establish a strong resume of lifts. The true height of his potential is far from being determined. Nevertheless, everything that is being seen so far suggests a bright future for this young man.

It is unclear when we will see Jackson Powell take to competition again, but it will likely be soon. There truly is nothing like seeing the promise of a young athlete such as himself and watching them grow and evolve over time.