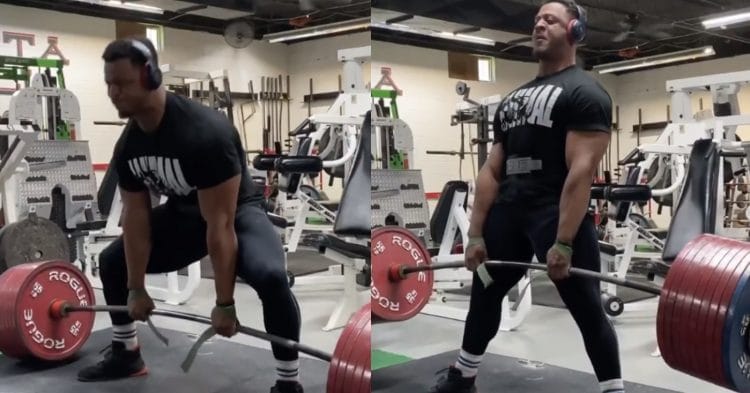 Deadlift world-record holder 26-year-old Jamal Browner is working to be the best in the world, and his recent training sessions show how he’s pushing himself. This week, he hit a 476.3kg/1,050 deadlift in lifting straps and with a lifting belt using the sumo stance. The lifting straps would not be permitted in a powerlifting copetition, but the deadlift is over four times his competition weight class. He posted the lift on Instagram, two days after he shared a 430.9kg/949.97lb deadlift.

In his post, Browner mentioned that he doesn’t like the sumo versus conventional debate, noting, “Do as you please.” He commented with this lift,

I hate the sumo vs conventional debate. Do as you please. Find which one you’re stronger at, master it, compete & have fun.

🤔 I might try 1k conventional next week. Depending on how my body feels 😅
#IamAnimal @animalpak”

Browner is currently the all-time deadlift world record holder in the 110kg weight-class, with a 440.5kg/971.1lb record. This record he obtained last year at the 2020 World Raw Powerlifting Federation (WRPF) Hybrid Showdown II. By July he was beating his own record with a 455kg/1,003.1lb lift.

If Jamal Browner wants to be the best in the world, he doesn’t have that far to go. 2018 World’s Strongest Man Hafthor Bjornsson holds the heaviest deadlift ever record at 501 kg/1,104lb. The 2017 record was hit by Eddie Hall which got bested by Hafthor Bjornsson when he pulled 501kg last year. The best record prior to that was Russia’s Ivan Makarov who made a 490kg/1,080.3lb lift. Makarov attempted 502.kg later but was unsuccessful.

It is worth noting that Browner’s used the sumo stance for his latest deadlift, and was assisted by lifting straps and a lifting belt. The sumo stance is not the same as the conventional stance, which is more difficult and is the stance that Hafthor Bjornsson, Eddie Hall, and Ivan Makarov used for their records.