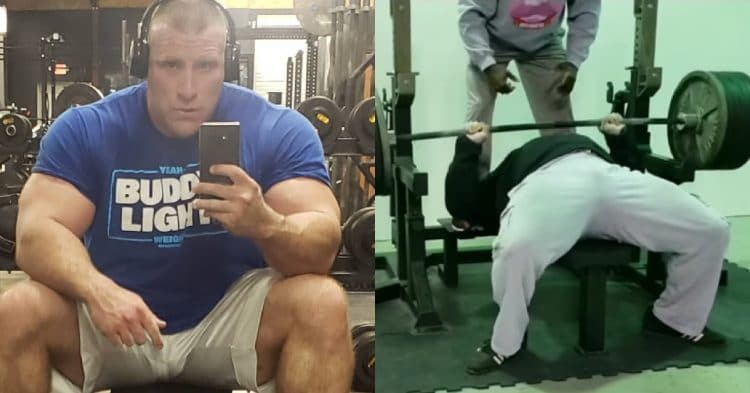 James Strickland has been aiming for a massive goal of a 700lb bench press. He is getting one step closer to that, by hitting a strong double in the gym, recently.

Strickland is a lifelong athlete, starting out as a swimmer, before transitioning to football. This, coupled with his history in the U.S. Navy left him never too far from the gym. As a result, he naturally made the transition to powerlifting, competing for the first time in 2014.

Since then, Strickland has gone on to accomplish some pretty impressive things. Bouncing between the 275lb and 308lb weight classes, he has found success in nearly every single meet he competes in. Moreover, he looks to continue this, when he competes in the Pressing the Pieces Together event, in Lombard, Illinois in April.

However, James Strickland has more of a goal in mind, than just winning the contest. He has been pushing towards a goal of a 700lb bench press. This would make him the lightest man to hit that milestone during a sanctioned event. In order to do that, he has been putting in some serious work in the gym. Most recently, this came in the form of an Instagram post, showing him crush a smooth 615lb bench for two reps.

This is a marked improvement from where Strickland was a few days before this. Another recent video showed him hitting two sets of 615lb, with a big of struggle. However here, he crushes the two reps like they are nothing. Take a look at the other video for comparison.

When James Strickland competes at the Pressing the Pieces Together event, he will be doing so in an attempt to raise money for autism awareness. As noble as that is, it will be just as exciting to see him going for the 700lb bench press.