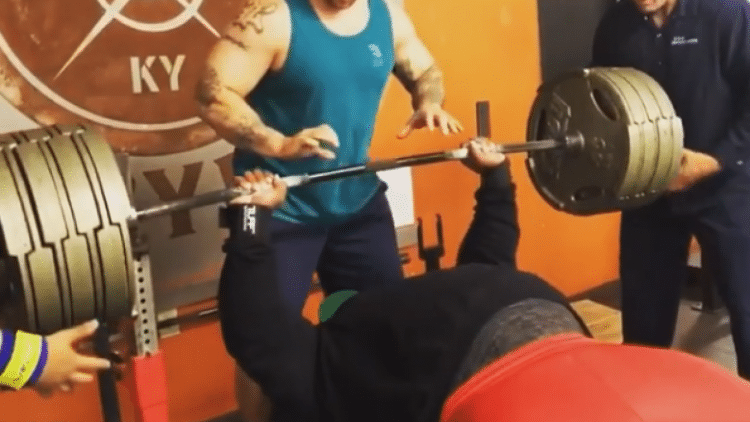 Julius Maddox is known for his unbelievable feats of strength. He followed up on this with one of the heaviest bench press sets ever seen.

Maddox has accomplished some amazing things in his career as a super heavyweight powerlifter. He holds many championships, with his most recent win being at the Boss of Bosses 6, in Mountain View, California. In fact, it was at this meet, which he broke the all-time bench press world record, with a 335.5kg/739.5lb lift. Furthermore, this beat out the previous record by just a single pound.

However, Maddox is not satisfied by this accomplishment. In fact, he looks to eventually reach the milestone of 770lbs, which is simply unbelievable. Nevertheless, he has been putting in the work, in the gym, to make this happen.

Most recently, Julius Maddox set a new personal record for his bench, and uploaded the video to Instagram. In the footage, you can see him absolutely annihilate a massive 318kg/700lb bench press. Moreover, he manages to do it for three reps, all the while making it seem like it was easy.

“THEY SAY ITS IMPOSSIBLE UNTIL ITS DONE….”

This is a really incredible lift from Maddox. While it is not the most amount of weight he has ever lifted, the fact that he does it for three reps is stunning. In addition to that, work like this is going to be perfect to send him on his way to his goal of 770lb. If he manages to set that gigantic record, he will cement his place as the raw bench press king, with a lift nobody could contend with.

Currently, Julius Maddox is expected to compete in January and April of next year. However, to minimize the chance of injury, he is not full-on competing at these meets. Nevertheless, it will exciting to see how heavy he can lift when those competitions come around.