Want to know how Jason Momoa got in shape to play the role of Arthur Curry in DC's Aquaman? Check out his badass workout routine and the eating regime that got him jacked and shredded. 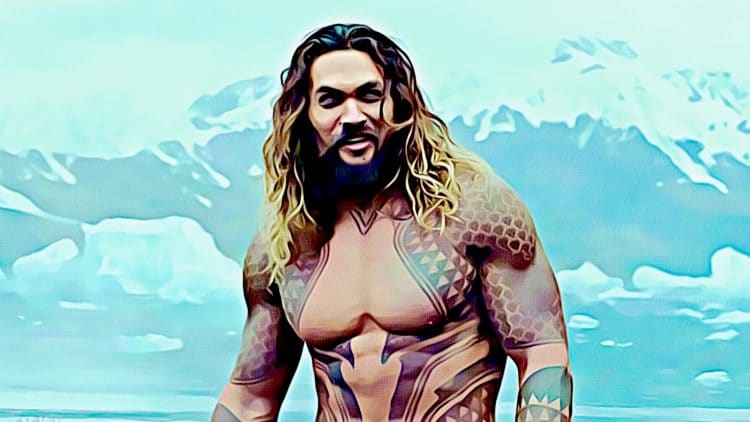 You probably recognize him as the Trident-wielding DC comics character Aquaman or Khal Drogo from the ultra-famous TV series Game of Thrones. Jason Momoa has become of the most highly sought-after actors in Hollywood.

That’s probably to do with his dashingly good looks… ok, and his impressive physique… alright and maybe being 6’4″ has helped his career a bunch too.

Momoa got his start as Jason Loane in Baywatch: Hawaii roughly two decades ago (1999-2001) and his unique look and acting chops have gotten him many other film roles.

Some of those include Ronan Dex in the Syfy science fiction series Stargate Atlantis (2005-2009), Conan in the 2011 reboot of Conan The Barbarian, and Khal Drogo in the HBO series Game of Thrones (2011-2012), and of course Aquaman. He’s also voiced many characters and had a producer role for several projects.

The Hawaiian-born, Iowa-raised actor made his theatrical debut as Arthur Curry/Aquaman in a cameo in the superhero film Batman vs. Superman: Dawn of Justice. Then in 2017, he played Aquaman in Justice League before the solo movie (Aquaman) of the same name was released in late 2018.

He’ll reprise his role as Arthur Curry in the upcoming sequel Aquaman and The Lost Kingdom, scheduled for release in 2022.

While many are fascinated by his film credits, we’re guessing many of you are here because you also want to know what this hunk of a specimen does to get so jacked and shredded (we all wanted to know in fact).

While his partly Hawaiian genetics probably play a big part in how easy he can pack on muscle (as he’s said many times), there are no alternatives to proper training and nutrition.

Of course, he’s admitted that working out isn’t really his thing unless he’s getting paid.

“I don’t touch a weight unless they’re paying me to do it,” he said in an interview with Daily Mail. “I don’t like going into a gym.”

But to play the King of Atlantis, Momoa knew he’d need to get into the best shape of his life and trained very hard for his roles in Batman vs. Superman, Aquaman, and Justice League.

Momoa was able to transform his body and add around 25 lbs of muscle.

He was in the gym 6 days a week for about two hours per session and it took several months to achieve the desired look.

The training consisted of functional strength training and a program called accelerated Results 7 or AR-7.

The AR-7 regime, developed by Eric Laciste, who was his trainer at the time, involved doing supersets for 30-minute sessions, 2-3 times per day.

It required him to do circuits that involved seven sets of seven reps, with seven seconds rest in between, followed by six sets of six reps with six seconds rest and five sets of five reps with five seconds rest.

He’d also do 45 minutes of cardio per day for his heart and physical fitness. Although, he’s always been a very active person and loves surfing, rock climbing, skateboarding, and axe throwing to name a few of his hobbies.

Keep in mind, Jason Momoa had a few different routines and trainers as the years progressed. Therefore, we’ve included a few of his different workouts routines that we found on the internet.

The AR-7 workout program really kicked Jason Momoa into shape and it was one that he used to make some of his best gains.

Day 3: Cardio and back

Before this workout, Jason would warm up with pull-ups, dips, and air squats. Choose relatively light weights since this routine involves a decent amount of volume.

Triple superset (3 moves below with no rest in between)

Rest 1-2 minutes after a set of each exercise and do all three exercises again for 4 more sets.

Back, biceps, and forearms

Triple superset (3 moves below with no rest in between)

Rest 1-2 minutes and do all three exercises again for 5 sets.

For these supersets, you want to perform one set of each exercise, take a small rest in between and repeat until you’ve completed 4 sets per exercise.

For these supersets, you want to perform one set of each exercise, take a small rest in between and repeat until you’ve completed 5 sets per exercise.

For these supersets, you want to perform one set of each exercise, take a small rest in between and repeat until you’ve completed 5 sets per exercise.

We’re assuming day 7 can be used to rest or some light activity is appropriate.

Jason Momoa’s workouts aren’t too complex but they are incredibly challenging!

To be able to gain lean muscle tissue and lose body fat Jason Momoa had to develop a discipline unlike required for any of his other roles. That meant cutting junk food out of his diet, except for the usual pint of his favorite beverage Guinness beer of course.

And like his relationship with training, Momoa is not interested in keeping track of his nutrition which is why he has someone to do it for him.

The more we write this article, the more we’re starting to realize that Jason Momoa would rather be outdoors or socializing and having fun than bothering with any training and diet regime. That’s OK though as long as he can come in jacked when it matters and to look the part of an underwater god.

“What they do offer me is rockclimbing because that makes me sane,” the actor said in an interview with Chris Van Vliet. “It’s very challenging for me to workout for vanity to play a role.”

Momoa would also not eat carbs all day long just so that he can afford to have a beer at the end of the day. Plus, his intense work schedule, the physical requirements/stunts, and being away from his family for months means he needs to be able to unwind and enjoy something, which happens to be some Guinness beer.

“The dog needs a bone, and that bone is a Guinness at the end of the night.”

His trainer at the time, Mark Twight, also understood Jason’s love for beer which has certainly become a thing at this point.

“It’s no secret that Jason loves Guinness — he has his own signature Mano Brew in the Guinness lineup — so generally, I would restrict solid carbohydrates unless needed to fuel a particularly intense day of training or recovery,” Twight told Men’s Health.

“I would observe, and count, and interview, and then have the chef adjust total calories and macros (protein, carbs, and fats) according to what was actually happening during the day or week. I call it ‘supervised freedom.’. A successful outcome depends on honest communication.”

“The main tip here is simple: know what, when, and how much you are eating. More importantly, know how it affects you. Be sensitive to it. Question everything. Take responsibility. If you are dissatisfied with your current condition, then something you are doing is the cause. You did this. Own it. Change it.”

“Leaning out for shirtless scenes and dropping weight for rock climbing are functionally synonymous. Increase the low-intensity volume. Impose high-intensity peaks that bump post-exercise metabolic rate for a few hours but keep them short to avoid jacking up appetite. Reduce caloric intake. Eat carbs around training (before and after) but restrict them otherwise. Above all, stop drinking alcohol for the period leading up to a shirtless scene or climbing trip.”

Momoa would eat lots of vegetables, good carbs for energy, and plenty of muscle-building protein.

This is a sample eating plan.

His supplement regime consisted of protein shakes, a multivitamin, and BCAAs.

The story behind Aquaman is similar to that of Jason Momoa’s. He was born in Hawaii where his father was from, and after his parents split, he spent most of his youth in Iowa with his mother, although he bounced between the two places growing up.

He’s said that both are beautiful places but entirely different worlds.

“It’s an honor to be a brown-skin superhero for sure,” he said in another interview. “There’s a lot of Polynesian kids who are going to be very stoked to have someone to look up to like that. It’s going to be weird but it’s an honor.”

“Jason brings a lot of his personality and his own upbringing into this role which is very appropriate I think. What a role model he would be for kids growing up in different cultures so to speak.”

Momoa has said that he’s never put so much of himself into a film before.

Jason Momoa is married to Lisa Bonet. The two have been together since 2005 and got married in 2017. Momoa is the stepfather to Zoe Kravitz, Bonet’s daughter from her ex-husband and famous singer Lenny Kravitz.

In 2007, Momoa and Bonet had their first child, Lola Iolani Momoa, and the very next year she gave birth to their son, Nakoa-Wolf Manakauapo Namakaeha Momoa.

Momoa also knows a little martial arts too for his role as Ronan in Conan The Barbarian. He began learning and practicing the Brazilian Jiu-Jitsu (BJJ) in 2017.

Jason seems like an all-around very athletic guy who would probably excel at a lot of things.

Jason Momoa is an incredible success story and while his physical appearance and Hawaiian genetics certainly helped, he was willing to put in the work even when he would rather go surfing and rock climbing.

The Aquaman star didn’t get a big-screen role until later on in his career but he’s been kicking butt ever since and there’s a lot more to come.