A complete guide to watching the Hafthor Bjornsson vs Devon Larratt boxing match, and the rest of the card 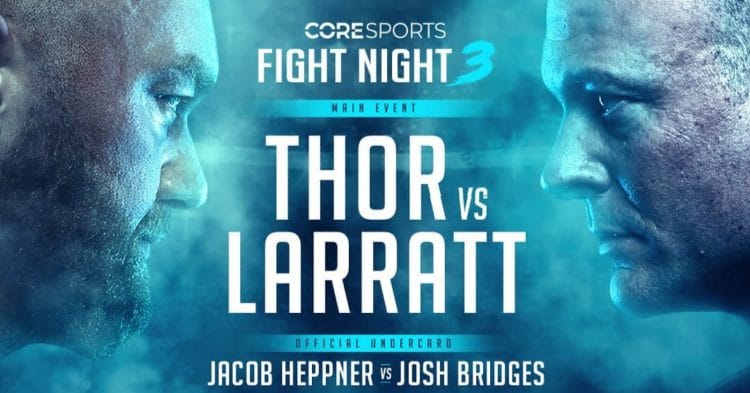 The boxing match between Hafthor Bjornsson and Devon Larratt will headline Fight Night 3 in Dubai, on Saturday, September 18th. This is complete guide to the entire event, including how to watch the stream online.

Originally slated to be the highly anticipated fight between Eddie Hall and Bjornsson, Larratt stepped up on short notice after Eddie suffered an injury. This was a big blow to fans who had been following the journey of these two for more than a year.

Instead, the former World’s Strongest Man will be facing the arm wrestling world champion in a pro bout, consisting of six, three-minute rounds. This is just one fight on a card that features world champion powerlifters, CrossFit athletes, and more throwing down in the ring.

How To Watch Hafthor Bjornsson vs Devon Larratt

While this may not be the fight that fans were originally hoping to see, Hafthor Bjornsson vs Devon Larratt is an interesting contest nonetheless. After all, Thor did get dropped in his last fight, so it will be interesting to see what improvements he has made.

The entire fight card can be purchased through the CoreSports.world website, where the entire nine fight card can be streamed for $9.99. On top of that, if you already pre-purchased the event before Eddie Hall was forced out, you can watch this contest for free, as well as the future rescheduled bout between Eddie and Thor.

There is a lot of unknowns heading into this main event between Hafthor Bjornsson vs Devon Larratt. While we know a little bit about Thor, practically nothing is known about how Devon will do in the ring.

Standing at 6’9, Hafthor will have a four inch height advantage over Devon, who is 6’5. Thor is also 14 years younger than Devon, and while he has lost a ton of weight over the last few months, he will have a solid weight advantage too.

At the end of the day, anything can happen, and Devon Larratt obviously has a puncher’s chance. That being said, this bout is clearly booked in the favor of Hafthor Bjornsson, which makes sense considering the stakes of the future fights he will have.

Stay tuned to Fitness Volt for continued coverage of this boxing match.