During the 2020 Mr. Olympia, Jen Pasky Jaquin was awarded the honor of being the first female IFBB Pro Wheelchair bodybuilder 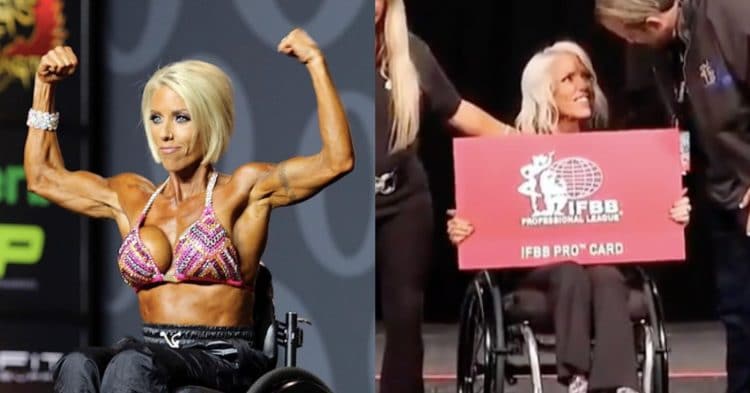 Before the 2020 Mr. Olympia even began, there was talks about history being made at this contest. This proved true for Jen Pasky Jaquin more than anybody else.

Jaquin has been a strong ambassador for the female side of Wheelchair Bodybuilding for a while. She has done guest posing at the NPC Nationals in 2018, before doing the same at the 2019 Olympia, and Arnold Classic Pro Wheelchair in 2019 and 2020, to name but a few. The only reason that she has been doing guest poses in these contests was simply due to the fact that the IFBB did not have a division for female wheelchair athletes to compete in.

All of that is beginning to change, as was revealed during this year’s Olympia. Jen Pasky Jaquin had a guest posing routine on Saturday, in between the Wheelchair athlete’s posing routines, and the results being read.

However when she was done posing, a very special announcement was made. Jen has become the first woman to be awarded an IFBB Pro Card to compete as a wheelchair bodybuilder.

This is obviously a massive achievement for Jaquin, as for the rest of the division. She was presented the award by Nick Scott, the CEO, President, and Founder of Wheelchair Bodybuilding, Inc. He was acting as co-host for the Wheelchair Olympia, and he gave a nice speech to express the importance of this moment, not just for Jen, but for the sport as a whole.

Wheelchair Bodybuilding is a way to include the differently abled in bodybuilding competition, and it has delivered on some pretty solid performances over the years. Athletes are judged based on the proportions in their upper body, namely their back, chest, shoulders, and triceps. They must do four mandatory poses, which include front double biceps, side chest, back double biceps, and abdominals. From there, the judges rate the form of their poses, as well as the development of those muscle groups to determine the winner.

The Wheelchair division has been coming along lately, and it provides a great opportunity for those who may not have otherwise had the ability to compete on stage.

Then to award Jen Pasky Jaquin with the first IFBB Pro Card for the women’s side of this division just goes to show much of an impact it has made for the athletes involved. It will be great to see more athletes granted their pro cards, so that we can see some more women competing in the future.