Before the finals of the 2020 Mr. Olympia, we take a look at the top four bodybuilders, Brandon Curry, Phil Heath, Big Ramy, and Hadi Choopan 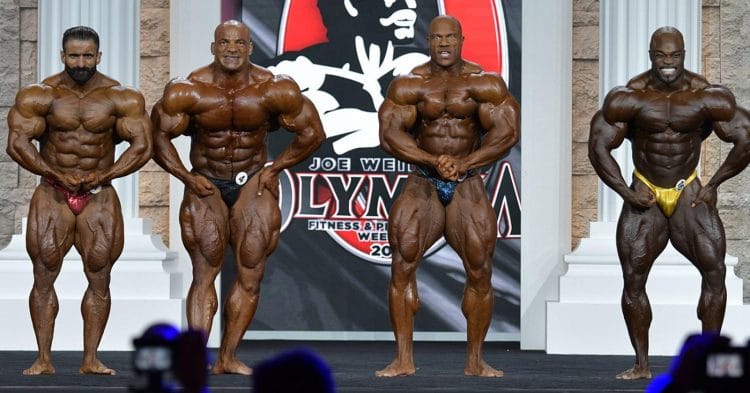 The 2020 Mr. Olympia is underway, and fans are pumped about the way the Men’s Open division has looked so far. So before the finals this evening, we thought it apt to take a deeper look at the top four contenders for the throne, after their performances at prejudging.

This year’s Olympia had a lot to offer in term of excitement, but by far the thing fans looked forward to the most was the return of seven-time Mr. Olmypia Phil Heath, as he looks to capture an eighth win. Standing in his way is reigning and defending champ Brandon Curry, who won the title in 2019, after it was left vacant by the disqualification of Shawn Rhoden.

Also making a massive impression, when the athletes faced off in Friday evening’s prejudging, was fan-favorite Big Ramy, who definitely made it clear that he was deserving of the special invitation he got for the contest. Also making it in the final four of the prejudging, was Iranian bodybuilder Hadi Choopan, who barely made it to the U.S. in time for the big show.

All four of these giants looked great on stage during the 2020 Mr. Olympia prejudging, but who has an edge for the finals? Before they go down this evening, we wanted to take a look at how each of these men looked in the first step of competition, and what their strengths and weaknesses could be heading into the finals.

Reinging and defending Mr. Olympia, Brandon Curry looked really sharp on stage for the prejudging. He looked super hard and well conditioned standing next to everyone, even though he was not the biggest on the stage. He showed great definition everywhere, with his lats and back being deceptively wide.

During the back shots, it was clear that he did not have the same girth as some other bodybuilders, but when he flared out his lats, the difference was stark.

Something could possibly stand in the way of a second consecutive Olympia win for Brandon, is that lack of size compared to others like Phil Heath and Big Ramy. Another potential issue is his less than stellar legs, which even got the attention of Phil during prejudging, as he called attention to them on stage. Again, these are minor critiques that may not matter in the end, because overall he looked better than he did when he won last year.

Big Ramy is one of those guys that always seems to have the promise to win the Olympia, but can never quite seem to put it all together. That reputation might have changed after Friday’s prejudging. The Egyptian bodybuilder promised to peeled this year, and that was absolutely the case. He looked better than ever in terms of conditioning, and was going toe-to-toe with Phil on the back poses. Not only that, but his legs looked to be leaps and bounds better than anybody, as it often the case.

With that in mind, there are a few things that have the potential to get in the way of Ramy winning the Olympia. Some areas of his physique are not as hard as the judges may like it to be, with a little extra bulk on his frame. That being said, there were other areas of his package that more than made up for that, so it is quite possible that we could be seeing him crowned the 16th Mr. Olympia.

Judging by the way Hadi Choopan looked during the 2020 Mr. Olympia prejudging, you never would have guessed that he found out for sure that he was competing, about a week out from the show. The Iranian is known for bringing insane levels of conditioning to the stage, and this year was no different. Just like his third place scoring, People’s Champion winning physique of last year, he has a fully complete package this year, that looks good all the way around.

Unfortunately, therein lies the problem: Hadi looks basically the same as last year. Don’t get me wrong, that is still a world class physique, deserving of being recognized as one of the best in the world, but while everyone looks to have improved, he seems to be very similar to his previous showing. Anything can happen, as he still has one of the best and most complete physiques in the world, but this and his usual size disadvantage could potentially pose a problem for him when it comes to tonight’s Olympia finals.

Alas, we get to the man of the hour, the seven-time Mr. Olympia winner and returning champ, Phil Heath. There were a lot of questions about what his physique would look like after nearly two years on the shelf, especially when it came to the lackluster midsection that cost him his eighth title in 2018.

Those questions would be answered, as he looked to be in good shape overall, showing much better control over his midsection. Not only that, but his back posing looked just as good as you remember, prompting the crowd to lose their mind while he displayed it.

That being said, there are a few things that could stand in the way of Phil’s eighth Olympia win, namely his conditioning. While he looks to be in great shape, he seemed to holding onto a bit too much water during prejudging, and started looking a little gassed by the end of the posing.

While his midsection did look better overall, there was a pretty gnarly scar going down the middle as a result of his hernia surgeries, and it leaves his abs sitting a little bitt oddly at times. Now they call Phil Heath Mr. Saturday Night for a reason, so who knows how he will look tonight, but either way it was incredible seeing him back on the stage again.

Who do you think will win the 2020 Mr. Olympia? Be sure to stay tuned to Fitness Volt tonight, for the live results of the finals.