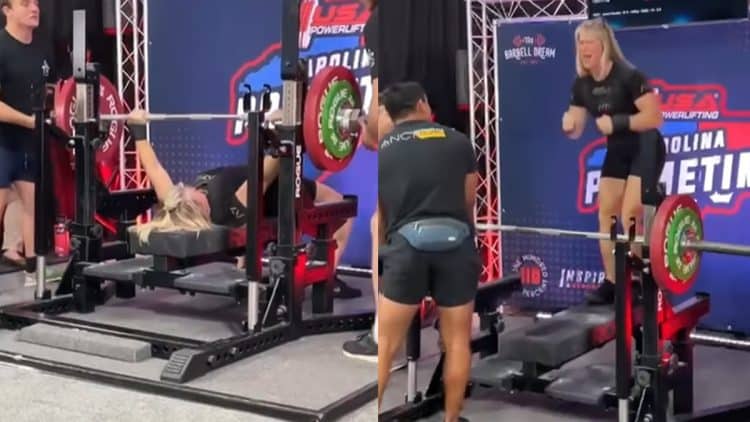 Powerlifter Jen Thompson is easily one of the greatest women’s bench pressers ever and possibly even the best one. Over the years, she has been so consistent that no one has even come close to matching her achievements. Jen displayed this once again at the 2022 USAPL Carolina Primetime, which took place on October 15th, 2022, at Palmetto State Barbell in Greenville, SC. Thompson had one of her best career performances, which was topped off by a new 327.5-pound (148.5-kilogram) USAPL American National Bench Press Record.

According to the result list, Jen Thompson came in at 67.55 kilograms (148.9 pounds) of bodyweight. This placed her in the under 75-kilogram weight class for the first time in her career, where she managed to beat the USAPL Bench Press Record. In addition, having competed in the raw division, Jen only utilized wrist wraps to aid her in the lift.

Jen Thompson demolished the previous record, having outperformed it by a margin of 18.5 kilograms (40.8 pounds). Jasmyn Penn previously held the U75KG USAPL American National Record of 130 kilograms (286.6 pounds), which she set at the 2021 USAPL Raw Nationals.

Although Jen Thompson was glad to break this bench press record, she explained in the caption of her Instagram post that she felt capable of lifting more weight. In addition, Jen claims that this is also an Unofficial World Record.

“Smooth like butter. Kicking myself for not going for 330 – definitely had a little more in the tank!”

Over the past few months, Jen Thompson has been focused on the 2022 USAPL Carolina Primetime and strived to perform at her best. Therefore, it comes as no surprise that this is one of her greatest performances yet. Jen successfully completed all nine lifts and scored new squat, bench, and total competition PRs.

*Jen Thompson has a heavier deadlift competition PR of 207.5 kilograms (457.5 pounds) which she made at the 2018 USAPL Raw Nationals.

Jen Thompson has taken part in over 120 sanctioned competitions, with the 2022 USAPL Carolina Pro becoming the newest one. In this 23-year-long process, Jen has been breaking National and World Records for decades now, while also winning almost every competition she has entered. She is also an 11x IPF World Champion and an IPF Hall of Famer.

Jen Thompson now holds the USAPL American Bench Press Record in three separate weight classes (U60kg, U67.5KG, and U75KG). Rarely anyone can boast of such a feat, and it is unlikely that it will be repeated for a very long time.