According to George Farah, 'people don't talk about Blessing [Awodibu] anymore because Andrew [Jacked] came in the picture.' 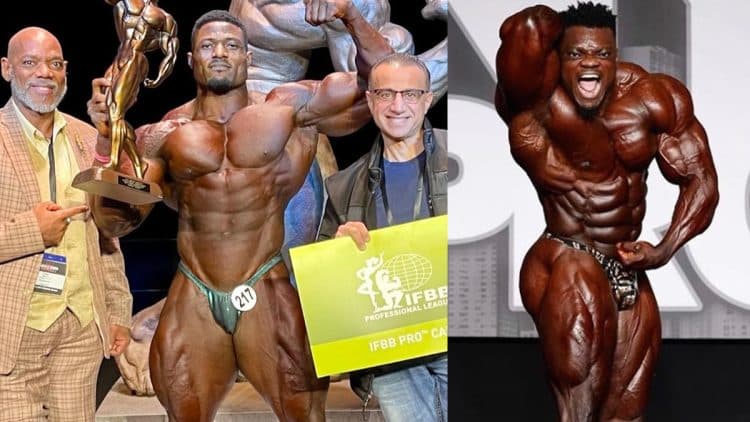 Having guided a number of high-profile bodybuilders to success, coach George Farah is no stranger to the challenges present in the sport. In a recent podcast, Chad Nicholls, George Farah, Milos Sarcev, and Chris Aceto discussed Blessing Awodibu’s chances against Andrew Jacked at 2022 Olympia.

This year’s bodybuilding season will come full circle this December at 2022 Mr. Olympia in Las Vegas, Nevada. A slew of competitors made their presence known in the Men’s Open division as of late, including Andrew Jacked, who championed a stellar rookie season.

Back in March, the Nigerian native earned his Pro card after claiming the 2022 Arnold Amateur title. He’s coached by nutritional wizard George Farah and four-time Arnold Classic winner Flex Wheeler. Andrew’s success snowballed from there as he also managed to earn back-to-back victories at the 2022 Texas Pro and the Arnold UK contest.

Before Jacked won his pair of Pro shows, there was another Nigerian keen on making a statement in the IFBB Pro League. Blessing Awodibu accomplished that when he won two consecutive titles earlier this year.

Similar to Jacked’s physique, Awodibu’s aesthetics, full muscle bellies, and thin waist guided him to success at the 2022 Indy Pro and New York Pro. Given their similarities, a few bodybuilding gurus and coaches sat down to discuss Awodibu’s chances against Andrew Jacked at 2022 Mr. Olympia in nine weeks.

In a round table discussion with Dennis James, Chris Aceto, Chad Nicholls, and Milos Sarcev, coach George Farah discussed a potential showdown between Jacked and Awodibu.

“A lot of people don’t talk about Blessing [Awodibu] anymore because Andrew [Jacked] came in the picture. I’m going to tell you something man — if Blessing would have continued to do shows, I think he could have won four or five of them,” says George Farah.

Farah believes if Andrew and Blessing are both at ‘100 percent,’ Jacked wins. He added that Andrew still hasn’t dabbled with growth hormone, which Farah says would make Jacked even bigger.

“I’ve never seen them next to each other,” says Farah. “I’ll put it this way to you, if they are both 100 percent, Andrew will win.” “People don’t believe me when I tell them. Maybe Milos knows because you’ve talked to him. But he [Andrew] still will not take GH [growth hormone]. I don’t know if he doesn’t want to take it, or if he doesn’t like it.

He said he tried it once and it made him hold a lot of water. I can’t force certain people to do things. My job is to give everybody 100 percent and it’s up to them on how they’re going to perform,” George Farah said. “Yes, he was a touch better [in England versus at the Texas Pro]. If you notice from the back double biceps, in England — actually his glutes started showing. In Texas, he didn’t have that. He was maybe a little bigger, five or six pounds bigger but he didn’t have that dryness.” George Farah shared.

Big Ramy’s coach Chad Nicholls says he doesn’t believe Blessing will get the chance to be compared to Jacked at 2022 Olympia.

“No way. Not even close. Those two people won’t even be compared,” says Chad Nicholls.

According to guru Chris Aceto, he would definitely ‘go with’ Andrew Jacked in a comparison against Blessing Awodibu.

“I’m really impressed with Andrew simply because of the height. The front lat spread looks wild. The front double bicep – he can tilt and make it look like something special. Both of those guys — I think they’re big guys, huge structures, which can potentially carry them to really high placings possibly. We haven’t seen them in the lineup before. I would definitely go with Andrew Jacked. I think he’s more impressive,” Chris Aceto explained.

Following up with his assessment, Nicholls shared that Awodibu’s legs are imbalanced. Since one of Blessing’s legs is ‘drastically’ smaller than the other, Chad believes it could take a few years to remedy his lower body.

“Andrew at this point in his career is much more complete than Blessing. Blessing is a great bodybuilder but he’s still a couple years away when you look at him in overall comparisons, he’s still lacking legs, and not only lacking legs, but he’s got one leg that’s drastically smaller than the other because of the imbalance in the leg.

That could take a couple of years to balance back up to match his upper body. Because of that, I think he’ll fall quite a bit at Olympia,” explained Chad Nicholls.

Sarcev used four-time Mr. Olympia Jay Cutler as an example of someone who had uneven legs but still found success.

“I don’t see that happening with Blessing [beating Andrew]. Structurally, I was thinking upper body whoa — it is super comparable. Lower body, this complete picture… I think Andew [Jacked] has the huge edge. Blessing has one leg smaller but you always call Jay Cutler’s one leg smaller,” says Milos Sarcev.

Chad remembered working with Blessing and said one of his legs is three inches shorter than the other.

“He’s [Blessing] got one leg that is shorter than the other. Yes, he twists and hides it really well. I know when I worked with him, I think there was over a three-inch difference in legs. It’s a big big difference,” says Chad Nicholls.

Lee Priest: “I Think Samson Can Beat Andrew No Problem”

When bodybuilding veteran Lee Priest was asked about the potential matchup, he favored Andrew but said Samson Dauda could surprise a lot of people later this year.

“Well, [Michal] Krizo is going to beat them all,” says Lee Priest. “Yes. It is a real question. The way Samson [Dauda] is looking now — the last pictures at 310 [pounds] and his conditioning — I mean Andrew Jacked is great yes, but I think if Samson comes in his best — even if Andrew is at his best, from what I’ve seen in photos, even though you can’t really go off photos, I think Samson can beat Andrew no problem.”

In the past, Cutler has mentioned that 2022 Olympia could be the greatest fans have ever seen. The last time the bodybuilding legend tackled the Men’s Open lineup at the 2022 Olympia, he stressed not to count out former champion Brandon Curry and William Bonac.

Additionally, Cutler has mentioned that Andrew Jacked has the tools to defeat everyone at Mr. Olympia except the two-time reigning champion Big Ramy.

RELATED: Flex Wheeler: ‘If Big Ramy Comes in The Way He Looked Last Year, I Think He’s Going to Have a Problem’ With Andrew Jacked

Many are predicting an unforgettable show with loads of talent expected to compete at this year’s contest. Despite an experience gap, these gurus believe Andrew Jacked has more upside than Blessing Awodibu at 2022 Olympia.